Associated Press
LONDON — World leaders, film critics and Hollywood stars remembered Peter O'Toole on Monday as an actor of towering talent, blue-eyed Irish charm and unfettered hell-raising — an icon of a vanished, less strait-laced era of filmmaking.
"There won't be any more like that, will there?" said 73-year-old actor Michael Gambon, who played Dumbledore in several "Harry Potter" films.
O'Toole, the 81-year-old star of "Lawrence of Arabia," died Saturday in London. Britain's prime minister and Ireland's president were among the many expressing condolences
Irish President Michael D. Higgins said O'Toole had been "unsurpassed for the grace he brought to every performance."
O'Toole was nominated eight times for an Academy Award without winning — a record. He was awarded an honorary Oscar in 2003.
Nick James, editor of film magazine Sight & Sound, said O'Toole was "an actor with a kind of bohemian quality to him which has kind of passed on — largely to do with health and safety concerns on movie sets."
"You're not allowed to behave that way anymore," James said. "You don't get hell-raisers anymore because you can't get them insured."
O'Toole had long suffered from ill health, his famously handsome face eroded by years of prodigious drinking. He gave up alcohol in 1975 following serious health problems and major surgery, but was unrepentant about his life of excess.
"If you can't do something willingly and joyfully, then don't do it," he once said. "If you give up drinking, don't go moaning about it; go back on the bottle. Do. As. Thou. Wilt."

Thelemite? There's not much about Thelema in the AP article.
An unique individual ... yes.

electrum93 was probably intrigued by the last 4 words in the quote:

This is missing: Love=Law
Lutz

Also missing is the word, "What." Now if there was a What instead of an As, then the case would be closed, and Sir Peter would be a convicted, er, confirmed, Thelema-ite. As it is, we can only suspect him of vaguely quoting AL, or AC, or was it Rabelais?

"Rabelais is considered one of the great writers of world literature and among the creators of modern European writing. .... Rabelais gives us a description of how the Thélèmites of the abbey lived and the rules they lived by:

All their life was spent not in laws, statutes, or rules, but according to their own free will and pleasure. They rose out of their beds when they thought good; they did eat, drink, labour, sleep, when they had a mind to it and were disposed for it. None did awake them, none did offer to constrain them to eat, drink, nor to do any other thing; for so had Gargantua established it. In all their rule and strictest tie of their order there was but this one clause to be observed,
[move:1n3ws6gh]Do What Thou Wilt;[/move:1n3ws6gh]
because men that are free, well-born, well-bred, and conversant in honest companies, have naturally an instinct and spur that prompteth them unto virtuous actions, and withdraws them from vice, which is called honour."
^ from http://en.wikipedia.org/wiki/Fran%C3%A7ois_Rabelais

I find it interesting how my successors
Aiwass and Crowley
came to quote me and build my Abbey
;)[/align:1n3ws6gh]

I think I can help here by means of a simple exercise…. 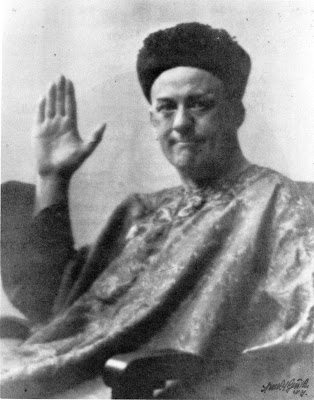 I am truly Lost in Space over the Marmite connection.

Of course, his name is Peter OTOle

If you define "Thelemite" then we may be able to get somewhere.

Any Brits here?  That top photo looks like Johnny Vegas.

It still seems to be very uncertain whether Peter O’Toole was either a card-carrying (“declared”) or unofficial (“implied”) Thelemite,  or not.  He was certainly a “hellraiser” in his time, but I don’t think that quite counts?!

The only immediate connection with A.C. I can think of is that Gerald Suster once proposed to Ken Russell that P.o’T. might play the Beast himself in a projected film he (Gerald) was "advising" K.R. on research on that subject at that time in the late 80s (and making a very nice’n’easy does it 5 grand for his services into the bargain).  Most unfortunately - as it was indeed a very good suggestion - the idea was never picked up upon (although it was on the cards at one time) as the film never got made.  (The screenplay and treatment which Gerald himself wrote - 666 - is over a hundred pages in length but only went up to c. 1906.)

He does look very vaguely like Johnny Vegas there – maybe in a bad light, squinting, and not taken in with a very penetrating glance. (I wonder why it is, that I don’t feel very surprised, to somehow get the feeling, that if it had been me who’d started this thread, or had anything to do with it in terms of flippant addenda - it would have been Locked by now?!!)