This brings up several points.

1) Authority. There are several types of authority (the subject of this thread). There is the concept of an "author," who writes a book and is thus referred to as an "authority." Big deal, eh?

Then there is "political authority," which Mao tells us "grows out of the barrel of a gun." This is the "authority" of the gang leader, the local warlord, and the Establishment in general. It is based on the principle of "Do what I/we say, or I/we will hurt you or imprison you or kill you. Very simple, eh?

There is also the "spiritual authority" of prophets, channels and metaphysical bigwigs. Their "authority" comes about ONLY because some disciples or followers grant them that authoritative power. If NOBODY thought Therion had something important to say/write, then there would be NO Thelemic authority or scholarship or interest. This type of authority is strictly granted by followers.

So, in all matters, it really comes down to one's (anyone's) "personal power," eh?

2) Classes. A,B,C,D & E. These are AC's inventions and method of classification. Supposedly AL, the Bible, the Torah, the Koran, and the Tao Teh Ching are all in the Class A category - even though we all know that most of them have been fiddled to death with the fiddler's personal spin.

3) Rubbish. This is what Adi-Da called, "Spiritual Garbage." UG Krishnamurti lumps Class A stuff under the general classification of "The Spiritual Con."

4) A certain point. What point is that? After what "certain point" does ALL of the above become meaningless? We could posit the point of ego-dissolvement (somewhere in the Abyss), or perhaps at Shivatmadarshana - when the illusion of the Magus/Atman disappears, leaving all metaphysical concepts in a void.

The authority of a scholar is only as good as his or her words are able to capture the mind(s) of his or her reader(s).

The authority of a prophet is only as good as his or her words are able to capture the mind(s) of his or her listener(s).

The authority of a politician is only as good as his or her aim with a gun (or his/her skill with a sword in olden times), or his/her ability to summon troops.

It all comes down to one's "personal power" in the final analysis.

Yeah, sure. And maybe the Christian God created the world 6,000 years ago and just created it to look billions of years old, just to test our faith.

Aha, but how do you know my friend he didn’t?!

I don't know for sure, but I have absolutely zero reason to think it's true. So I don't accept that claim. If you want me to accept it, my mind can be changed, but it's only going to be changed by compelling evidence and reasoned argument.

In the same way, I don't know that purple people eaters don't live in my broom closet waiting to strike when I open the door, but I have no reason to think it's true. I don't accept claims -- or even waste time entertaining them as true -- just because I can't know that they're false in some absolute, abstract sense.

Los: Thank you for finally clearing that up, as I believe we have all wondered.

Back to the topic now?

The OTO archives has a copy. I don't remember any others.

The Centennial Edition of the BOTL states that the manuscript facsimile there is from a Tunis Edition.

The OTO archives has a copy.The Centennial Edition of the BOTL states that the manuscript facsimile there is from a Tunis Edition.

Ah, consistent "in all his power",

"William Blake" wrote:
In chains of the mind locked up,
Like fetters of ice shrinking together,
Disorganiz'd, rent from Eternity.
Los (still) beat(s) on his fetters of iron

Perhaps one day this role-play will reach the stage of repenting "the chain of Jealousy" but I suspect that like your model you will find that by then it is too late.
How ironic in a proclaimed Thelemite.
Blake meanwhile looks on in wonder and dismay at such willing missing of his point.

I now have it on good authority that there are at least two other surviving copies  of the Tunis Edition in the UK...including one complete and one partial one  in the Yorke Collection, and one in private hands.

Also, the Centennial Edition is a from a recent photographic facsimile of the manuscript (not from a Tunis edition set of photographs) printed in halftone. Whether it was photographed in color is not clear.

The Editorial Note beginning on page 157 of the BOTL Centennial Edition gives the provenance of the material used there:

"This edition combines two earlier definitive publications. The first part, Liber CCXX, is a resetting of the corrected second impression of the 1938 e. London edition of The Book of the Law, the last edition directly supervised by Aleister Crowley before his death, incorporating corrections made for the Pasadena edition of 1942 e.v. Liber XXXI, the manuscript of Liber Legis did not appear in the London edition.

The second part reproduces the whole of AL, Liber Legis. The Book of the Law, limited to 11 copies and issued in Tunis in 1926 e.v.. The Tunis AL focused on the ms., LIber XXXI omitting the edited setting of Liber CCXX. This edition gave first publication to "The Comment" to Liber Legis, with supporting matter in the form of relevant quotations romLiber Legis...."

I find the study of the Centennial Edition halftone, and the line copy in the full-size loose pages of Equinox of the Gods, first edition, complementary. They are different "facsimile editions" of the manuscript.

The original Tunis 1926 Edition and the EQG edition, unfortunately, are not readily available. The best, imho, readily available, and easily used facsimile, is in the Big Blue Brick, Liber ABA. The earlier Weiser Equinox reprints use a reduced version of the manuscript facsimile from the EQG, as do most other facsimiles (if they are included with a typeset version at al!!).

I have a question:  Is the Tunis Edition of AL the same edition that Crowley gave to close disciples that also came in a special handmade box?  I recall this being mentioned in Perdurabo.  I'm thinking that there were only 8 instead of 11, but I could very well be mistaken.  Thanks!

I believe so.  Th Tunis edition was 65 reduced photos plus a brochure in a box. There were 11 copies.Tunis edition data

The sixty-five leaves of manuscript, paginated 1-22, [1] 2-22, 1-21, were photographed and printed, reduced (contrary, still, to Aiwaz's requirements) on photographic paper, and housed in a scarlet leather-covered box with a fitted lid. The title-leaf, correctly on handmade paper and printed in red and black, reads: 'A L. Liber Legis. The Book of the Law sub figura XXXI as delivered to Ankh-af-na-khonsu the Priest of princes who is 666. Now privately issued after 22 years of preperation to eleven persons. Anno 0 Sol in 18° 32' 45" Aries Luna in 7° 16'55" Pisces [i.e. 9 April]. From the Lair of the Lion.' The limitation page is most revealing for it prints a list of eight of the eleven people to whom copies were presented:

abn53,
So that makes 4 of them accounted for.  One in the O.T.O. Inc.'s Archives, one complete & one partial in the Yorke Collection, and one in private hands.  Do you know which numbers these are, besides the #11 in the Yorke Collection?  Do you know if any of those still have the original box?  I'm particularly interested in #6, Crowley's copy.  I do hope that all 11 have survived.  This is my favourite edition of any of Crowley's books, not that I'd ever be able to own one, of course!  I'd LOVE to see a pic of one with the box so that I can drool over it!  ;D

Gee...I wish I knew more or had even more contacts. That's why I look for help here.
Sorry, but that's about all I know.
There is a picture of the title page of the Tunis brochure in my book, and I do have a
scan of the rest of the brochure as well.

abn53,
The scan is really nice!  Thanks!

This is not the appropriate thread, however, perhaps everyone can forgive me for an interjection.  A new calculation has revealed a dual way to derive 418093.  Let us not read the ink blots of AL III 1 as Abrahadabra.  Say what?!  Instead, let us read it as written in verse III 47 of the manuscript as Alrahailalra ( a copyrighted word ).  Then we discover 418093 in two ways.  First, the fact that according to the canonical reading of AL without verses numbers, i.e., as recited, from the first Nu to the second Abrahadabra, using the so called Key of Chaos

Now let us read both Abrahadabras as Alrahailalra - the key word written in the "chance shape of the letters and their position to one another" of the word Abrahadabra in the manuscript writing of III 47, then the alpha-numeric sum of from the first Nu to the second Alrahailalra including verse number characters equals

Perhaps, someone can verify this sum?  It appears I was wrong about the Prime 13 times Prime 5907 sum.  I trust everyone is familiar with the word Alrahailalra - it has been known for many years - if not I will give an account of the word in the sequel.

You are right! This is NOT the appropriate thread, and you are not forgiven (by me - who knows about "everyone") for interjecting this qabalistic/numerological stuff into this thread, and other threads, when it simply serves to derail the topic. Please interject your numbers by creating a new thread devoted to this sort of thing. 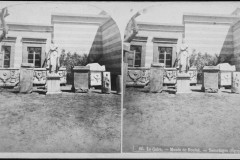