Skip to content
Forums
LAShTAL Forums
Thelema
Thelema
'The Book of the La...

'The Book of the Law manuscript study books'

In this thread, contributors can provide the title of a book - or the titles of books - with the study in detail and depth of the manuscript of The Book of The Law, as the subject matter.

"Those who discuss the contents of this Book are to be shunned by all, as centres of pestilence. All questions of the Law are to be decided only by appeal to my writings, each for himself."

Yes, Shiva, the "Tunis Comment" can - depending on the interpretation of it - be a tough one in respect of publishing any study of the manuscript of The Book of The Law.

The closest I have found so far is Genesis of The Book of The Law (a trilogy) by David Allen Hulse.

The second closest I have found so far is Red Flame - A Thelemic Research Journal - Issue No.8, edited by M. Cornelius.

Consider that the Tunis Comment contradicts several statements in the manuscript of Liber AL:
Ch I: (41) The word of Sin is Restriction.
Ch II: 75, 76 Aye! listen to the numbers and the words
(the riddle.) What meaneth this, O prophet? Thou knowest not: nor shalt thou know ever.
There cometh one to follow thee: he shall expound it.
Ch. III: 47. This book shall be translated into all tongues: but always with the original in the writing of the Beast; for in the chance shape of the letters and their position to one another: in these are mysteries that no Beast shall divine. Let him not seek to try: but one cometh after him, whence I say not who shall discover the Key of it all....

These clearly do not refer to Crowley, but a later person. How can this be accomplished without study and interpretation of Liber AL? Would not any "official" interpretation be a restriction, if further study is denied, as suggested by The Comment. Rather each for himself, however he chooses to explore or divine the solutions suggested.

Should the Tunis Comment, therefore, be accepted literally, and restrict study of the original source of revelation, the "Class A" book that Crowley says in Equinox I (7): page 386.."The fill title of he book is LIBER L vel LEGIS svb figvra CCXX as delivered by LXXVIII to DCLXVI and it is the First and Greatest of those Class A publications of AA, of which is not to be altered so much as the style of a letter." The earliest occurrence of the Tunis Comment as "Class A", as far as I know at present, is not stated as such before Motta's Commentaries of AL in 1975. 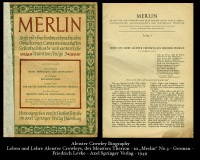