I wonder if other Thelemites of various strands would agree with me that the concept of THERION is less developed within Thelema than that of BABALON. There seems to be a great deal of literature (mainly written by men) about how BABALON manifests through women in the new aeon (or vice versa), but very little on men specifically manifesting THERION (or vice versa) as opposed to simply being Thelemites. This may partly be due to Crowley considering himself as TO MEGA THERION, but even then he clearly regarded the two as opposite equals, such as in the Star Ruby. Perhaps some of the women on this site could comment, we’ve been talking about you for a century 🙂

I know that in some of the celestial magick involving EQ-11, as promulgated by The Church of Typhon-Christ and others, there is a practice whereby one can, if he passes the Ordeal X, become THE BEAST.

I haven't come across other references to the possibility.

The way I understand it, both Therion and Babalon pertain to the grades above the Abyss and Crowley was clearly the only one, within Thelema, who claimed this with any degree of justification.

Whether Babalon manifests through women is difficult to say: it is either absolutely true for every woman at all times (just as every woman manifests Shakti) and then as such merits no comment or - again if understood as an equivalent of the grade of Magistra Templi - it is not happening at all. I see too much of 'here is my naked picture and my hair is dyed red, ain't I Babalon' mentality involved and do not see it as "a counsel to accept all impressions; it is the formula of the Scarlet Woman; but no impression must be allowed to dominate you, only to fructify you; just as the artist, seeing an object, does not worship it, but breeds a masterpiece from it" (The Book of Lies, Kephale Delta, Peaches, Commentary). Also, if the woman is to be girt with a sword and if the sword represents intellect, where is that intellectual system produced by a woman that displays the nature of Babalon as understood in Thelema? I see a lot of women girt with sword in academia and in literature, sciences and arts, but specifically within the context of Thelema...? I might be hyper-critical, but I would say that Frieda Lady Harris was the only one, so far.

Similarly so the men. Who is exhibiting the qualities of Magus, who's Word is the Logos, who knows the Truth of one's being and is always Going in accordance with his Will? Who has the Wisdom? Who has the Phallos? Well, on the one hand, we can never really know. It is difficult to judge another person, almost impossible to judge an adept. Being hypercritical (and foremost with respect to myself), I would again say that to my mind Kenneth Grant is the only one who comes close to Crowley in this respect, so far. He has truly created an original system: I don't think it works for the others, except as an inspiration, which in itself is a fantastic thing, but still...

So, I guess, instead of an answer, I engaged in a lot of rambling. Time for me to shut up.

Thanks to both of you, keep it coming!

In one sense, the Beast is the something-or-other that one can sometimes sense licking the inside of one's cranium and who doesn't so much seize one as lightly push one aside to make his mark and who laughs critically at one's paltry attempts to make, say, poetry on one's own. One name I've given to the Beast, from a dream, is the Singer, who of course was Apollo.

How Babalon fits in with this "Apollo" requires some investigation, but I suspect that her symbol is the Lyre in that Apollo carries the Lyre and has the function of "taking the Lyre places" according to the rules dictated by the form of the Lyre, which includes his need to moderate any tendency toward frenzy.

I completely disagree! Whilst I think that the concept of BABALON may be well defined as any woman willing to shag a Thelemite bloke and swallow, perhaps even take it up the arse. Also that THERION is not deffined as to what his equivalent obligations may be. There is simply no real work done by high initiates by women in THELEMA of any note except Nema. It could be argued that the male path has been worked but any female path has been left undeveloped, just look at the Gnostic Mass and the list of saints.
The Great White Brotherhood and its priestcraft has naturally ensured against the Left Hand Path and its naturalness. In so doing it has worked against the middle, feminine Preistesshood path too.
The woman that Jack Parsons thought the embodiment of BABALON went on to be the spiritual teacher of the Californian Hells Angels, amongst other things. Perhaps she was just doing it for herself?

I get what you're saying and its worthy of note that the "Left Hand Path" is one which actively incorporates (to the point of emphasis) the role of the female as paramount. Its also worth noting that LHP is not some counterpoint to RHP but works with both polarities-in conjunction, as opposed to isolation. Yes, Elixir is made from several sources-but I needn't quote some of AC's funny yet brutally bigoted remarks regarding the "use" of women.

AC did write that the Scarlet Woman was a "office" whilst the "Beast" was a definite person (and, of course, he was that person).

Does "Therion" then evoke that particular "definite person" as a resounding contact point for the Thelemic Magician or does it have larger application as formulaic potential?

We can state that "Every guy gets to be the Beast!" but I doubt this would have flown with AC, who understood himself as the Logos of the Aeon-and the singular manifestation of THERION.

Hmm. The Star Ruby poses Therion against Babalon and Nuit against Hadit - geographically speaking. Crowley identified himself as TO MEGA THERION, not just as Therion. I am aware that historically Alex's view of how Babalon has been regarded amongst males is largely correct, but such an attitude does tend to bite one in the arse. Hence my thought, that before randy young male Thelemites go searching for a woman who displays the Babalon energy they might try to develop the Therion energy within themselves first, But what is it?

To be more clear, I'd make "rules dictated by the form" the bolded item (by which I mean that any Beast must at least know the difference between playing a lyre and some other instrument) and I might change "moderate" to "modulate," since I'm not trying to say that the Beast is meant to be cut off at the balls, only that he should know what the lyre can take before breaking and what degrees of force, modulated, could bring his instrument to art.

On the other hand, if using the image of an inanimate object for a woman (or the supreme woman in this case) is a problem, then we could dispense with an awful lot of poetry and metaphor! However, I do see that the parallel I drew up might not quite fly. "To me! To me!" suggests that she can never be one of her forms...

Apollo, by the way, I see as a much darker or darker-dwelling god than usually portrayed. But Apollo was, after all, the god of the Sun (after Helios) and, as far as his connection to Thelema goes, we could wonder whether or not, in both cases, the Sun is not the Sun.

In which case, all this "Beast" and "Babalon" lingo is superfluous?

No. Yin (not+) Yang = Tao (or the revolution of it -- see the extremes that I said were NOT ). I think I'm talking about those two little seeds coming together. Straight F**king.

Neither ain't gonna get it on its own.

I must proclaim myself the simpleton of this forum. My viewpoint: One gestates in BABALON, and is born by her unto Binah.Therion is a God. Babalon is a Goddess. One must of neccessity be as Therion as one unites with Babalon. Thats it.

Walterfive
(@walterfive)
Member
Joined: 16 years ago
Posts: 856
24/03/2008 7:06 pm
"sethur666" wrote:
I wonder if other Thelemites of various strands would agree with me that the concept of THERION is less developed within Thelema than that of BABALON. There seems to be a great deal of literature (mainly written by men) about how BABALON manifests through women in the new aeon (or vice versa), but very little on men specifically manifesting THERION (or vice versa) as opposed to simply being Thelemites. This may partly be due to Crowley considering himself as TO MEGA THERION, but even then he clearly regarded the two as opposite equals, such as in the Star Ruby. Perhaps some of the women on this site could comment, we’ve been talking about you for a century 🙂

Yeah, Crowley considered himself To Mega Therion, and pretty much considered whoever his current squeeze was to be The Scarlet Woman. I think that most of us who actively operate with these Archetypes see them as such, and as such, they are Godheads that can be assumed for the duration of a ritual/working/channeling/whatever you want to call it.

Personally, I've always found that manifesting The Beast was fairly intuitive, and a read-aloud of the Invocation of Pan with proper ethnogenic inspiration is usually all that is required. He's the creative and generative male aspect of Chaos, after all.

Best of luck in your endeavors!

"sethur666" wrote:
I wonder if other Thelemites of various strands would agree with me that the concept of THERION is less developed within Thelema than that of BABALON. There seems to be a great deal of literature (mainly written by men) about how BABALON manifests through women in the new aeon (or vice versa), but very little on men specifically manifesting THERION (or vice versa) as opposed to simply being Thelemites. This may partly be due to Crowley considering himself as TO MEGA THERION, but even then he clearly regarded the two as opposite equals, such as in the Star Ruby. Perhaps some of the women on this site could comment, we’ve been talking about you for a century 🙂

I do agree that Crowley's personal perspective and paradigm may have skewed that picture a great deal, on several levels. This may even account for the apparent disproportion of males to females attracted to Thelema.

At any rate, I think that the identification of spiritual ecstasy with sexual ecstasy remains clearly illustrated in the Nu-Had/Babalon-Therion archetypes.

I do hope some replies from the ladies are posted.

"the Great Beast and Scarlet Woman who are the human officers of the Æon of Horus. They are avatars of solar power and sexual force"

"the earthly emissaries of those Gods"

not actual god/goddess themselves, but their oracles

though everyone is able to aspect the god/goddess

i know that i am the representation of my mother, her tool, her will manifested in matter

you are meant to become therion and go through me

and of course you like it when im tough 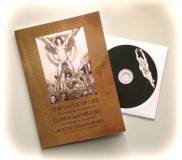