This seems to be a good thread to post in.

I’ve been pondering Crowley’s comments on LAM and noting his own decidedly rather “extra-terrestrial” or “Oriental” features in his own highly stylized self-portrait:

Recently I came across another example while conversing with an Egyptologist on Ahkenaton (1380-1362 BC), the Egyptian pharaoh responsible for introducing monolatry. He was responsible for forbidding worship of other gods and unifying and centralizing power on to himself as the physical manifestation of Aten. He moved his center to Amarna and built a temple to Aten there. What’s interesting about Aten is that it is depicted merely as a solar disk, with no other characteristics. The glyph does not “speak” to the people like depictions of other Egyptian gods in which their heads, body, and gestures convey information on the respective god’s character and function. Aten is the invisible solar disk behind the visible solar aspect of Ra. So in effect Ahkenaton was representing himself as divine yet more “hidden” than the visible sun.

What is interesting is that, along with his unification and centralization of power, Ahkenaton depicted himself with highly stylized features – reminiscent of Crowley’s stylized self-portrait:

Curiously these stylized features also appear in busts of Amarna princesses immediately after his death (1345 BC): 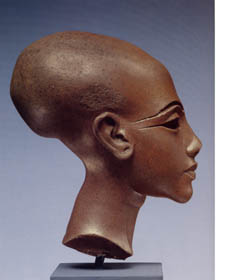 I asked my Egyptologist friend if there were any accounts of Ahkenaton claiming divine, as opposed to biological, origins - which, as JD Gunther notes, is a common trait of Christ-figures in the Aeon of Osiris - and he denied this, asserting the pharaoh respected and loved his father very much.

As he understood it, Ahkenaton was determined not to repeat the mistake of his father in catering to political demands, but decided to centralize power on himself in Aten-worship at Amarna. After Ahkenaton’s death, his inscription was erased from monuments – undergoing the damnatio memoria of a heretic or traitor.

I just watched the movie 2001: A Space Odyssey. In the end of the movie, there's a picture of a foetus.

For some reason, it reminded me of the subject of this thread. Perhaps this happened because of practices involving the same.

The foetus in the movie, as well as I think in reality, has a large forehead and large eyes relative to the size of its body.

The foetus is portrayed next to an earth-like planet in the movie. It seems like it's aproaching the planet. It is unborn and silent.

Has anyone reading this though of any connection between these things?

yes narwhal I have thought of it just now 😉
If it helps make any more connections for you, the Grant view (I would say to the best of my understanding) is that the space capsule for Lam is the egg.
Many UFOs seen are egg shaped.
In the Typhonian books Lam's egg is not just something he is born from it is also his space capsule.
The other word Grant uses is the vitality globule I believe.
So one can kind of free associate like
foetus=lam=egg=spacecraft=vitality globule=sperm? i dunno
hopefully this rambling based on one or two sentences in Typhonian Trilogies can help you .
😉 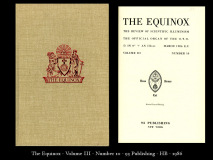