Does anybody know if Crowley left a proofread copy of the Book of Thoth, or made a list of errata (or even if the manuscript survives)?

I want to know if he corrected a word on page 117, top of the page, in the sentence "All reality is consequently compromised in the series of which these two letters form the beginning and the end."

Now I see, in the French translation of The Book of Thoth (Le livre de Thoth; Urania Verlag, 1993), that the translator has understood it as I did (this edition has an introduction by HB as Frater Superior X°, and is thus authorized by OTO).

There is no note that this is a correction, so it must have seemed only logical to the translator, Fr. Eos, that the original English was an error.

Does anyone have the German edition of 1983 to compare (it may be the same translator, I can't see from online descriptions)?

I was quite surprised to see this, being well familiar with the passage for many years now and never having noticed the probable typographical error before.

I've never heard of an errata slip, though I don't have a first edition but the hardbound 1969 Weister issue which looks like a straightforward offset litho production from the 1944 edition.

The catalogue of the Yorke Collection lists a portion of what I imagine is the typescript, though the pagination starts later than 117. Elsewhere in the Collection an Appendix is listed. This suggests that the typescript as a whole did not survive.

In 2008 a typed manuscript of 264 leaves of the Book of Thoth, corrections in Crowley's hand, was auctioned. It had belonged to Edward Noel Fitzgerald and the catalogue description has a thank you to Keith Richmond (Weiser Antiquarian), so he might know the answer - but I don't know if any copies were made.

I have no doubt Crowley meant "comprised", but given ff's information about the auctioned copy, it seems there is a chance that it can be proven.

belmurru
(@belmurru)
Member
Joined: 14 years ago
Posts: 1026
Topic starter 19/07/2013 5:14 pm
"fama_fraternitatis" wrote:
In 2008 a typed manuscript of 264 leaves of the Book of Thoth, corrections in Crowley's hand, was auctioned. It had belonged to Edward Noel Fitzgerald and the catalogue description has a thank you to Keith Richmond (Weiser Antiquarian), so he might know the answer - but I don't know if any copies were made.

Thank you very much for the information, fama_fraternitatis. Perhaps if someone knows Keith Richmond or can PM his address to me, he can be asked to contact the owner of the copy to ask if Crowley corrected this passage.

It seems sensible that “comprised” is meant, but one can never tell for sure with A.C. as sometimes his choice of wording can be a little unexpected.  I don’t personally feel that it is “meaningless” as it stands: the sentence could mean “compromised” in the sense of being a value judgement to say that we are all landed in reality for better or worse and so have to deal with it as best we can, and I think was the interpretation I placed on it myself when reading it previously.  Hope this may help?

The translator of the German edition, Klaus Lemur-Esser (probably of Amon Düül fame, see here: http://www.lashtal.com/forum/http://www.lashtal.com/forums/viewtopic.php?t=7 ) did also understand it as you did (or at least quite similar): "Die gesamte Wirklichkeit ist infolgedessen in der Reihe zusammengefaßt, von der diese zwei Buchstaben den Anfang und das Ende bilden." From the copyright page of the 1981 Urania German edition I would surmise that he used the 1969 Weiser edition as translation source. So he probably also guessed that "compromised" must be wrong.

It may be worth noting that Klaus Lemur-Esser did in fact pay attention while he translated the text into German: many of the mistakes found in the original have been silently corrected.

Thank you Lutz and Marcus for the German information.

I should update the auctioned copy information - Keith Richmond informed me that an auction house handled it, so he does not know who the buyer was.

Update (after three and a half years!)

It turns out that OTO has the typescript of the Book of Thoth brought to our attention by member fama_fraternitatis in post 81900 above. It confirms that the original reading was “comprised”.

HB has kindly allowed me to reproduce an image of the passage in question: 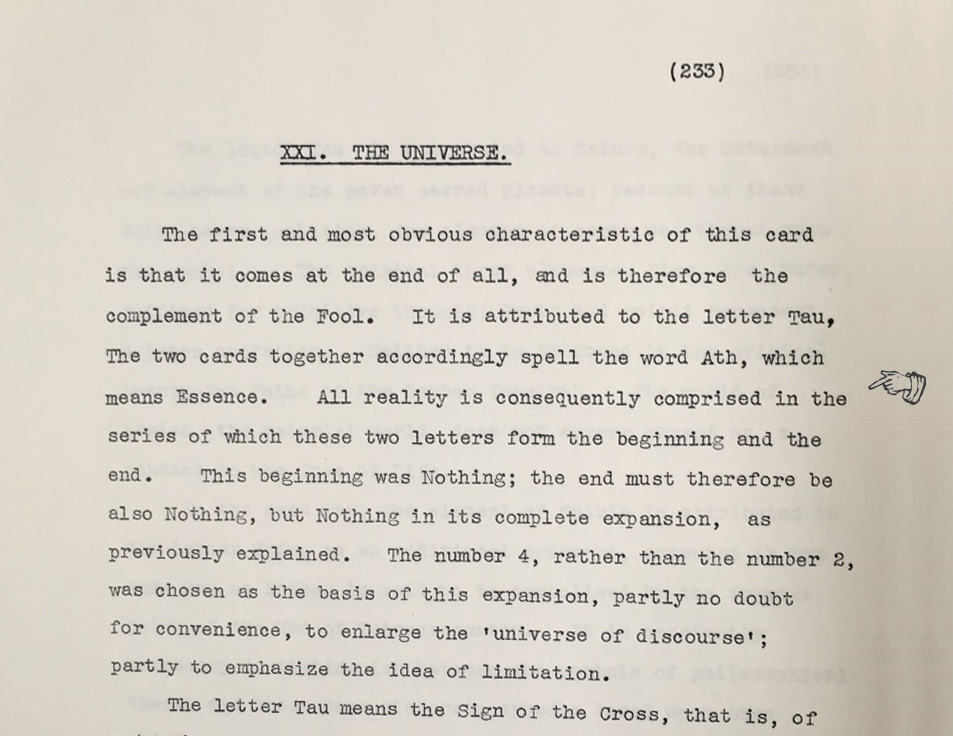 Thanks belmurru. That being said I think we can agree that after last year's electoral surprises in the UK and the US reality is now also compromised...