You are correct with regards to my error in referring to the Oath but I am happy my meaning wasn't lost.

What I am seeing is a parallel with the classic(AL) Formulae:

ET (The Babe of the Abyss)

I have observed all the sticks and stones directed at our departed Los over his affiliation with certain numbers and symbols. To be frank, I cannot say that I would not be tempted to likewise throw derision. But why? Because I disagree with his claim to MT based upon...what? My God Granted Infallible Authority to comment upon such things?

My mockery may reflect more about myself than "Los."

Which is not to say that I may not be correct. I leave that option open, also. But I am presently finding it to be in bad form to speak poorly of a former frequent flyer when he isn't present to engage.

"Los" only comes up in my post as an open "claimant" to the Title at Hand: MT.

I think I may have made the claim myself somewhere. It's not worth anyone's time to look for it. File it under "Whatever."

“Whether a proposition can turn out false after all depends on what I make count as determinants for that proposition.”

Do we require applause from...fill in the blank?

I appreciate and thank you, Shiva, for sharing your recent communication:

"Jones made it up to at least Grade 7 [7=4 -ed], and wrote about it = “beyond that grade, one does not need to disclose higher levels of attainment.” He was true to that mark."

It my perspective that MT is not a stamp upon the Person but a STATE in which the Person participates.

That STATE has its OWN view as to what the "Person participating" is.

Bill Breeze, in his "Prolegomenon" to my copy of Liber Aleph, ultimately concludes that Jones is "one of the cautionary tales of the Path of the Wise."

I would suggest the same of Aleister Crowley.

“ I have observed all the sticks and stones directed at our departed Los over his affiliation with certain numbers and symbols. To be frank, I cannot say that I would not be tempted to likewise throw derision. But why? Because I disagree with his claim to MT based upon…what? “

It was more in addressing his tone .
He did not set the setting to convince people here that his way was the way .

who is
James Beck (aka Jimmy Rocket). ?

kh: ...tempted to likewise throw derision. But why?

(1) Title IV, Section 8, Clause 418: "The "quality" of Binah is Silence." Of course, we know that this is an inner Silence, the absence of inner-dialog, mental chatter, but it also turns its face outward. VVVVV sent us a lot of "holy writ" as conveyed via "automatic writing" or "channeling" through the mind of AC or OM, who wrote the writ down. But we don't have examples of VVVVV giving speeches or condescending himself towards everyone else but Erwin and Blake. (I think VVVVV might have uttered a sentence or two somewhere in the holy writ, which I once had memorized, at least in part, but obviously only in short-term memory.

Also: Anyone who claims 8=3 or 9=2 may expect stones to be thrown against them. It's part of the tradition. Says so in the Scriptures.

Because I disagree with his claim to MT based upon…what?

It doesn't need any justification. It is sufficient to simply throw stones. It's part of the ritual.

When an entity shows up astrally, especially in a state of clarity and "reality," and it assumes the configuration of a mentor or a teacher, then you blast that image with a blazing pentagram. If it's a disgusied demon or some trickster, he/she/it will dissolve (if you really know how to pitch a pentagram), but if its a Master or some higher archetypal manifestation, the result is always (in my experience) the same: He/She/It smiles!

I have expressed this concept before, and I have illustrated it via visual transmission. It is found in a brief exerpt from The Sarcophagus of Nun, that can been seen here (only a minute long):
https://www.youtube.com/watch?v=5JOrpnbcHmE

There have been situations where I have identified aspects of my link to higher heights with a latin name or a numerical equation. I always follow such a bold statement with, "Feel free to challenge that in any manner."

At the Japan Karate Assn HQ in Tokyo, posted upon the door, is a Statement: "All challenges accepted."

The universal principle involved here is: Make the Claim; then Sink or Swim

The paraphrased reference in holy writ is: Clown! If he be a King, you can't hurt him. So blast hard and low and test his mettle." Says so in the Scriptures.

My God Granted Infallible Authority to comment upon such things?

Man has the right to speak/write as he will - Oz
Yes, this one allows attacks. We see it all the time, don't we?

kh: My mockery may reflect more about myself than “Los.”

Not "may" but "does." < This (^) is also a universal principle. That's why it's necessary to throw clean pentagrams. Not sloppy one's hidden with your/my own pre-judicials and internal conflict.

kh: File it under “Whatever.”

Okay, Frater FUW (filed under whatever), take this!
You did watch the short video, didn't you?
Oh Sh*t, you'e still standing!
I even detect a slight smile upon your face.

Los has placed himself in the same position here at LAShTAL that Achad acheived with Agape Lodge. All groups have a traitor, or a condescending quitter, as an archetype at which they can make comparisons, throw stones, or project pentagrams. At a certain point in my association with Solar Lodge, I became that archetypal dunce.

I'm sorry, but I find no evidence or reaction that permits me to throw stones at you. You would smilingly deflect the lunge, replying back with some opposite that neutralizes the punch.

Ths is the octogon, and there are no rules, except the Guidelines and the referee's (Moderator's) sense of impropriety.

kh: It my perspective that MT is not a stamp upon the Person but a STATE in which the Person participates.

Now you've done it. You've gone too far. You have declared the Truth of the matter. If you're not careful, the Universal Self, Atma the all-inclusive, is going to draft you into Chokmah.

Can we see the NEMO soap ad?

The following is a page from an newspaper. The NEMO soap advert is roughly in the middle: 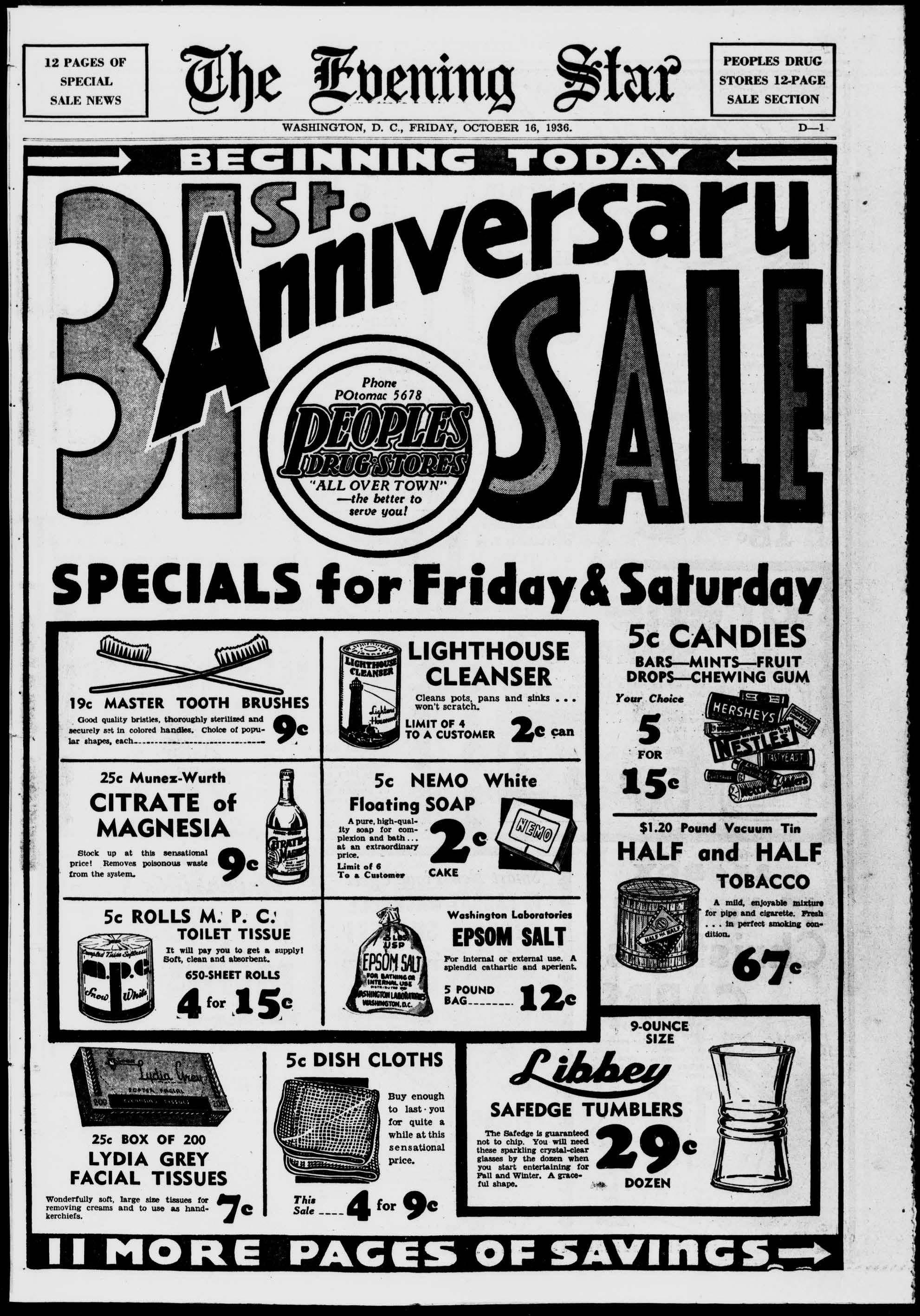 Thank you very much, Michael!

NEMO isn't just for the complexion and body, it's also for your laundry!