- which they say is attributed to Aleister Crowley by J.F.C. Fuller. They give no citation, however. Does anyone know anything else about his text?

Nothing in it strikes me as particularly Crowleyan, but the author clearly has an esoteric background. He derives tarocchi or tarochini (sic) "from Arabic turuquîn 'wayfarers', 'wayfaring jugglers', il gioco dei tarocchi, 'the game of the wayfaring people', whence French 'tarot des Bohémiens'", which is a rather erudite comment, as is some of the other information or speculation in the work. The author knows a lot about various kinds of rules, especially those of Piedmont, which is something I would never guess about Crowley - or that he played tarocchi or tarot at all.

I'll have to compare these rules with other examples in the standard sources. It might be a unique witness to a particular branch of this family of games.

Does anything else stand out to anyone?

In relation to this, I'm trying to gather together as many of Crowley's references to card games (Tarot only if it is the game, not the esoteric Tarot) as I can.

To begin with, there is "Pirate Bridge", probably his best-known contribution to card games. He mentions inventing this in Chapter 84 of Confessions (p. 825).

Foster discusses Crowley's invention of the game on pp. 31-32.

A discussion of the reception and brief career of Pirate Bridge by Fr. Αληθέυω here -

Please add any others you may know, stray references to card games played, etc.

"Rules for playing the game of Tarocchi" is mostly an adaptation and translation of Jacopo Gelli, Piccola enciclopedia di giuochi e passatempi (Milano, 1922; see below for link), pp. 29-40. I think this allows us to date it to the Cefalù/Tunis period, probably therefore 1922-1923.

I asked Richard Kaczynski, as the greatest authority on Fuller, where 100th Monkey Press might have got the information that Fuller attributed it to Crowley, and he told me that he does so in his “Bibliotheca Crowleyana” (a big thanks to him for this information).

Crowley has introduced it with his own remarks, including an etymology for tarocchi, giving some French equivalents (which Gelli does not do), giving an historical interpretation of the World card (p. 2), giving the name “Aeon” to trump XX (p. 2; this may be the earliest instance of him naming the card as such), and giving the etymology of “ace” (p. 2; again this is Crowley, not Gelli). Pages 3-8 are a straightforward translation of the equivalent sections of Gelli (pp. 34-40). On page 7 Crowley names XXI “the Universe”, the Golden Dawn name for the card.

There are some misprints or mistypes, and a section or a whole page is missing from the original typescript after page 2 – it ends in mid-sentence: “In Central Europe and the Balkans the set or pack of cards is reduced from 78 to 54, the suits of the black pip-cards showing only the numbers from ten…”; whereupon page 3 begins with a new sentence and new paragraph: “The following are the main rules of the Piemontese code:”

The broken sentence ending page 2 should have continued something like “to seven, and the red pip-cards showing the ace through four.” I don’t how much else is missing, because this is Crowley’s contribution from another source, and is not in Gelli. Since the 100th Monkey page says it is a stapled pamphlet, I assume that the page was already lost when Fuller collected it.

The first thing that stands out is the aforementioned etymology for Tarocchi. There are many esoteric etymologies for Tarot, fewer for Tarocchi, and Crowley’s astonunded me because it is essentially identical to one hitherto attributed to Idries Shah in 1964, in The Sufis. Crowley anticipates Shah by over 40 years! 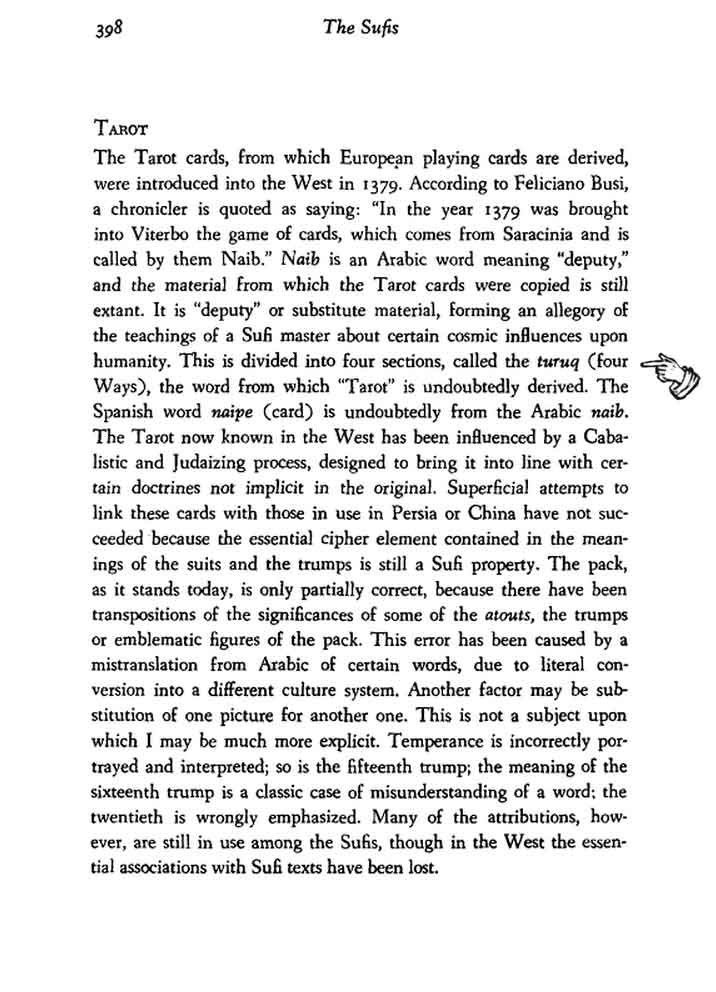 Shah gives turuq as “four Ways” (the four suits of the pack of playing cards).
Crowley’s typist must have made an error, putting a “u” after the “q”, which is an unfortunate automatism to many native English and French writers (see how often people write things like “Quabbalah”), so the word he meant must be turuqin.

turuq is the plural of tariq, and does indeed mean “way, road, path, track” –

turuqin is the genitive plural, so meaning “of the ways”. 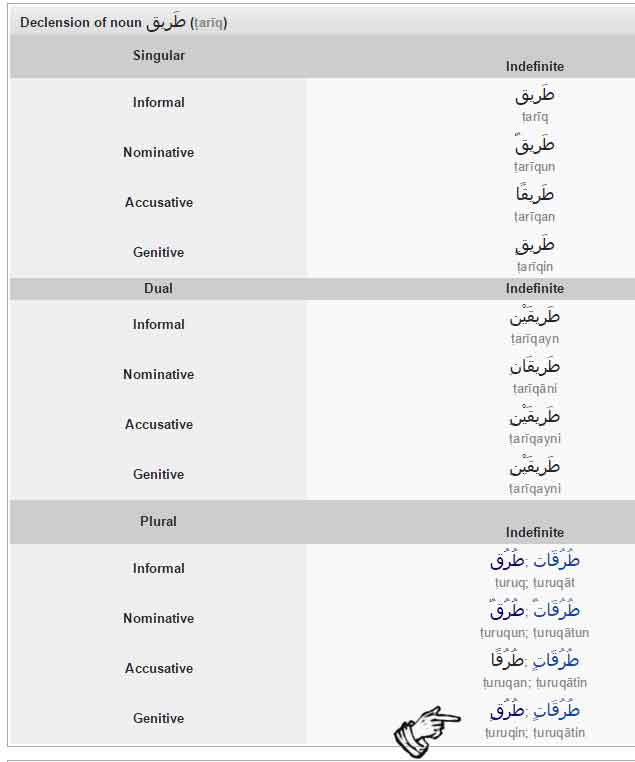 Both of the above screenshots are from the dictionary and grammar wiktionary
http://en.wiktionary.org/wiki/%D8%B7%D8%B1%D9%8A%D9%82
(click on “Declension of noun” at the bottom for all the forms of the word)

I can find no authority for Crowley’s understanding of it as “wayfarers”, but it is not far off to use the genitive plural – “of the ways”, as “people of the ways.”

There are some other interesting things to discuss about Crowley’s parts of this text, but the most enjoyable is to see him get such an edge over Idries Shah.

I'd like to have a go with that game sometime.