I've recently been reading through the seperate books which make up The Equinox, Volume 3. I've had no problems locating the following books from either Amazon or eBay (since they are either still in print or were in print not too long ago):

As for the missing numbers above, I haven't been so fortunate as to locate them. Not sure if they are in existence, rare or if I'm looking for the wrong title. As far as I know, these are the titles of the following numbers that I'm looking for:

As for #2, I haven't been able to find out if that was actually published or not... and as for #7: Shih Yi (I Ching), could anyone tell me if it has recently been published because I'm having a hard time locating it if it has. I was hoping to find a recent paperback edition such as this version of #8: Tao Teh Ching:

If anyone has info I'd appreciate it.

#2 The Gospel... was published as "Crowley on Christ", The C. W. Daniel Co., London, 1974, edited and introduced by Francis King. The copyright page has "First published in typewritten form as a limited edition of 200 copies as The Gospel According to St. Bernard Shaw, 1953."

I wouldn't be surprised if OTO Inc. has plans to republish in a better, more widely distributed edition.

Equinox III.2 is ready; galley proofs survived from Crowley's time; it includes "The Gospel According to St. Bernard Shaw"/"Liber 888" andd other stuff. I guess it will be published or in 2007 or in 2008, as the new Equinox IV 3 will come out first.

You may be able to find a copy of the I Ching on "www.abebooks.com".

I purchased my copy from that site some time ago. As a matter of fact, I've bought quite a few Crowley editions from various dealers on that site.

Do a thorough seach for any books you may be interested in purchasing---some dealers ask outrageous prices. For example, my copy of the I Ching set me back $25. An identical copy from another dealer listed at over $150.00!!!

Reading through some old threads in the absence of much else being mass debated at the present time, further to this from @teth93 two posts above

Equinox III.2 is ready; galley proofs survived from Crowley’s time; it includes “The Gospel According to St. Bernard Shaw”/”Liber 888” andd other stuff. I guess it will be published or in 2007 or in 2008

A reconstruction of [Equinox] III:2 with all the material it was supposed to contain, is in preparation, or so I have been told.

Ten years and ten days later on from this, it seems such a reconstruction is still mired in the matter of its preparation. Would anybody perhaps have a further, more recent update? An extraordinary situation, really, considering that the wretched thing is already supposed to have been preserved in galley proofs and therefore to require the bare minimum in preparation for getting it released - online at least, if nowhere else. Not to mention the reconstituted Confessions, Magick Without Tears, Magickal Diaries, complete Commentaries to Liber ALand the Holy Books et al, which we have now been promised for ooh, decades! I'd wager that the 70 year old copyright ruling itself will be more likely to expire before any of these actually see the light of day. Meanwhile none of us are getting any younger, and Lashtalian folk (such as, e.g. sethur666 a.k.a. steve wilson) are already beginning to DIE out before ever getting the chance to read this stuff. (These days at least, however, we seem to have been spared (c)oto's at one time fairly regular PR puffs that the "work is now 95% complete" or somesuch, possibly now having been embarrassed into maintaining some sort of a guilty ongoing silence.) For shame!

Roll on, the first of December ...

Roll on, the first of December …

Why the first of December? What do you think is going to happen on that date that's relevent to your preceding remarks? If it's the expiration of the copyright in Europe of works by Crowley published in his lifetime (or published posthumously within 20 years of his death), that's the first of January 2018.

It would be interesting to know the contents of III.2. 'The Gospel According to St. Bernard Shaw', for instance, was I think published in the 1950s by Germer. If so, it's my understanding that copyright will expire on the first of January 2018.

Why the first of December? What do you think is going to happen on that date that’s relevent to your preceding remarks? If it’s the expiration of the copyright in Europe of works by Crowley published in his lifetime (or published posthumously within 20 years of his death), that’s the first of January 2018.
You may well be right; copyright law isn't one of my specialities. December or next January, it is roughly in the same ball park (Whereas the late 2030's, for example, wouldn't be.) I'm sure having waited for so long already another month isn't going to make that much difference to most people (uness, of course, they happen to 'pass on' over the Xmas period)

It would be interesting to know the contents of III.2. ‘The Gospel According to St. Bernard Shaw’, for instance, was I think published in the 1950s by Germer. If so, it’s my understanding that copyright will expire on the first of January 2018.
I remember reading the contents somewhere on this very site, though at the moment can't seem to search it out. Off the top of my head, in addition to the main item you mention I believe there was the second, concluding part of John St John plus all the commentaries to the Holy Books and A.'. A.'. & O.T.O. libri that weren't previously published such as Liber 124 ("Of Eden & The Sacred Oak"), plus one or two other items. Personally I've always rather enjoyed 'The Big Stick' reviews which appeared in the other Equinoxes and am hoping there will be a few very good ones representative of that included as well.

Sorry I meant the same thing, perhaps I didn't express it clearly enough: when I referred to "the second concluding part of John St John", that was intended to indicate the same piece as Achad's magical diary "A Master of the Temple" (Liber CLXV). I wasn't aware there were any further instalments to be continued in subsequent numbers, however - would you (or maybe anybody else) happen to know how many more of them there might have been?

I don't know how many instalments were planned. However, there is a reference to this, suggesting that there were to be more than two instalments, in a letter from Achad to Gerald Yorke dated March 5th, 1948. Extract:

"In this connection I may ask whether you came across the manuscript of that part of my magical diary which was to have appeared in the several numbers of Equinox III which were never published. You will remember the first section appeared in Number 1. The second section was printed but never published, because that number of The Equinox only got as far as unbound sheets. The latter sections never appeared at all. But my connection with this whole affair is in no sense plain without at least that part of my record being published which was intended for The Equinox – for it contained the account of how I became Master of the Temple and under what circumstances."

Thank you, I wasn't aware of that before. How fascinating to learn that there might be several more sections!
I'm also much looking forward to when this "Unpublished Correspendence" between Achad and Yorke, etc is finally - er, well, published! (Even given Stafire's busy publishing programme, I would still take a wager on it managing to appear long before most of those items controlled & pointlessly held onto by the current [for the time being] copyright holder previously mentioned)

I’m also much looking forward to when this “Unpublished Correspendence” between Achad and Yorke, etc is finally – er, well, published!

The long-mooted correspondence between Achad, Yorke and others will finally be published later this year under the title The Incoming of the Aeon of Maat. Like many other items on my agenda, it fell victim to the drive to republish the trilogies: once a volume in the series had been published, there was a compulsion to move on to the next. Work on the correspondence is about 75% complete.

I am also looking forward to your Achad correspondence book.
Care to tell if you think people will glean any pearls of gnosis , new or otherwise, from the letters?
Also, care to give a teaser of perhaps one letter to LAShTAL?

Sorry if it's already been mentioned, but the copy of #3: The Equinox of the Gods by New falcon Press is perfect and complete, and not expensive. It's the one I own:

It seems to have gone up from the 20 or 30 I paid but 50 is still not too bad. Try searching obscure used sites. 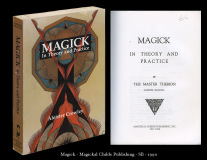