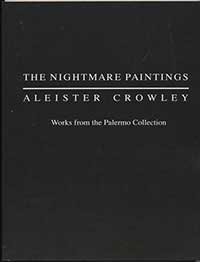 Four New Releases (all of some Thelemic interest)

Read on for much more information and cover illustrations. Los Lunas, NM: Academic Services International, 2012. First Edition – Hardcover. Hardcover. Glossy printed boards (no dustjacket). 8vo. 224 pp. B/W Ills. & Diagrams. This hardcover edition limited to 200 copies (there is also a softcover issue). This copy signed by the author on a specially-made color bookplate tipped onto the inside front cover.  The author, Frater Shiva, was a senior member of “Solar Lodge,” the 1960s US occult fraternity that drew many of its teachings from the works of Aleister Crowley.  He eventually resigned his position as Grand Secretary General and his membership in the Lodge, and went on to forge his own path.  Frater Shiva describes “Treatise On Naught” as “an exposition of insights that can be expressed in simple phrases – each of which contains the word NO, or Nothing, None, Never, Null, Nada, Nyet, Nein, Nay, Not, Knot, Naught, Zero, Zilch and Zip. This implies the Absence of Something or Anything or Everything, or some other form of the negative. These concepts hint at the third order of magnitude, the Supernal Triad, which is said to lie above and beyond the human mind. Only a madman or a disturbed person would attempt to explain this realm – except in contradictory or complimentary terms.”  He describes the book as being “comprised of nine short chapters. If you wish, you may choose to think of them as a series of nine atmic bombs, one placed at each of the nine lower sephiroth (spheres). After the ninth sphere undergoes Shivatmadarshana, there is a Gallery of nine appendices, including Riding the Middle Pillar, Tuat Juarez, The Human Energy Field, Encounters with the Light, and The Age of Iron [Kali Yuga].” New book. Print-on-demand type production values. A hint of rubbing to covers (received this way from publisher). Otherwise Fine.  Launch copies signed by Frater Shiva (42961) $45.00 William Wynn Westcott, Edited and Introduced by Dr R A Gilbert: A Magus Among the Adepts. Essays and Addresses

York Beach, Maine USA: The Teitan Press, 2012. First Edition. Hardcover. 8vo. xxii + 242pp. Quality black cloth with gilt facsimile signature on upper board, gilt titling to spine, frontis, index. Edition limited to 650 hand-numbered copies. “A Magus Among the Adepts” is a wholly new collection of thirty fugitive and unpublished papers by William Wynn Westcott. In the public mind Westcott is primarily associated with the Hermetic Order of the Golden Dawn, and while the twelve papers in the first section of this collection includes three unpublished addresses to members of the Golden Dawn, as well as gathering Westcott’s correspondence concerning Mathers and Crowley for the first time, they also include writings on alchemy, rosicrucianism, and magic. Other aspects of Western Esotericism – symbolism, divination, Kabbalah, the Mysteries and Freemasonry – are taken up in the thirteen papers that make up the following three sections. In all of them Westcott’s facility with his varied subject matter – from Gnostic doctrines; Zodiacal signs; Egyptian Mysteries; Kabalistic Cosmogony; and the Number 666, to the lore of the Basilisk, the Mandrake and “Mystical Animals of Antiquity,” among much else – and his mastery over its content, is clear. The final section of this collection contains two entertaining essays in which Westcott reflects on his professional career as a coroner. His life as a whole is encapsulated in a new biographical introduction by R A Gilbert, who has drawn upon a wealth of contemporary and personal archives to provide a rounded and detailed portrait of every facet of this complex and enigmatic man. ISBN: 978-0-933429-32-1.  Some launch copies with bookplate signed by the editor still available. Fine in fine dust jacket.  (42918) $50.00 Elizabeth Sharpe, Introduction by David Templeman: The Secrets of The Kaula Circle: A Tale of Fictitious People Faithfully Recounting Strange Rites Still Practised by this Cult

York Beach, ME: Teitan Press, 2012. First US Edition. Hardcover. 8vo. xxx + 98pp. Quality red cloth with gilt Sri Yantra design on upper board, and gilt titling to spine. Frontis, index. Edition limited to 500 hand-numbered copies. The Secrets of the Kaula Circle was not only one of the first books to introduce the secret Indian rituals associated with the Kaula or “Tantric” family to a Western audience, but it was also almost certainly the first book of its kind to be written by a woman. Elizabeth Sharpe was already well known for her studies and translations on Indian history and religions, but chose to write of the Kaula path as a novel, perhaps as it allowed her more dramatic effect, and in part at least she wanted it to serve as a warning, particularly to women, not to be drawn into the web of practice that she described. Her misgivings had been heightened by the apparent adoption of some of the practices by Western occultists, notably Aleister Crowley, whose person and activities she described in most unflattering terms. Although The Secrets of the Kaula Circle did not achieve a wide circulation, a copy did find its way into the hands of “the Beast,” who professed outrage at the thinly-veiled and unflattering portrait of himself, and considered suing the author.  This Teitan Press edition of The Secrets of the Kaula Circle includes the complete text of the original 1936 edition, along with a new index, and an Introduction by Dr David Templeman, an adjunct scholar at the Monash Asia Institute at Monash University with more than 40 years of experience in the study of Tibetan and related religious traditions. ISBN: 9780933429314.  NEW book. Some launch copies with bookplate signed by the editor still available.  Fine in fine dust jacket.  (42873) $39.50

As always we will do our best to keep the cost of shipping down when we process your order. If ordering several books through our website it will suggest a shipping charge – this is an automatic function that reflects the maximum you will be
charged.  If possible (i.e. if two light books can go in the same package) the charge will be reduced when we ship your
order.

Place your order direct via our secure website at: