It’s pleasing to read about a new book, one that is a sympathetic account of Aleister Crowley as a teacher outside of the core group of Thelemites…

Sheila Mann’s Hints of a Perfect Splendour, about Aelfrida Tillyard, runs to 1,006 pages.

The anthology, Cambridge Poets: 1910-1913, included some rather well-known names, such as Grantchester war poet Rupert Brooke, the then-young Sarojini Naindu (who became known as ‘the Nightingale of India’), the occultist Aleister Crowley and poems by Aelfrida and other female voices, 28 years before women were accepted as full members of the university.

“Aelfrida’s life was such an extraordinary one that I felt compelled to write it,” says Sheila, whose only other book, a history of the Evelyn Nursing Home/Hospital, A Wonderful Thing for Cambridge, was published in 2005.

But the “novel biography” about Aelfrida is of a different order: a vast opus which celebrates both a gifted woman and Cambridge’s place in the nation’s psyche 100 years ago.

Unfortunately Aelfrida’s marriage broke down rather publicly after she published personal anthologies in 1910, 1913 and 1916. A brief relationship, centred on his intense “guidance”, with the occultist Aleister Crowley was probably the final straw that broke the marriage’s back (though Constantine’s infidelities didn’t help). Crowley, who’d been an undergraduate at King’s (he studied philosophy before switching to English), was labelled “the wickedest man in the world” because of his appetite for drugs and sex with both men and women (including sadomasochist practices which scandalised society on both sides of the Atlantic) and was widely loathed by the establishment for his “investigation” into the dark side of the occult and the resulting credo: “Do what thou wilt shall be the whole of the law”.

Tillyard’s exchanges with Crowley – described in Chapter 16, “Aleister and the Sarasvati” – add rich detail about the archetypal satanist, right down to the level of the food they ate (roast chicken) when he invited himself to dinner on October 24, 1913, what he wore (the same brown suit she had seen in one of the “true dreams” which later helped develop and enhance her reputation as a mystic) – and even their postprandial conversation, during which Crowley says that Tillyard has “more spiritual consolations in a fortnight than most mystics get all their lives . . . higher spiritual experiences than St Paul or anyone I have ever heard of”.

Aelfrida responded to the “mixture of appreciation and flattery . . . with delight. And with scepticism: ‘Of course I knew that this was absolutely preposterous.’” Later she insisted that, despite her flirtation with Crowley’s brand of ceremonial magic, he had never “come right inside [her] soul”. And indeed some good came of the liaison. Around this time she postulated that man possesses two kinds of consciousness: individual consciousness and universal consciousness, and her ability to operate in both was impressive. “I am quite as much at home on the astral or spiritual planes as I am here,” she noted.

But her husband was having none of it…

Constantine, while stopping short of accusing his wife of physical infidelity, banned her from seeing or corresponding with Crowley. Though he later relented (subject to conditions), the damage was done (they eventually divorced in 1921 after years of separation: Aelfrida never remarried). That Crowley was happy to bang on about their meetings in Aelfrida’s definitive Cambridge Poets: 1910-1913 – though his post-Trinity connection with the city was tenuous – made matters worse. But however much husband and wife might have wanted it otherwise, Crowley’s influence permeated her thoughts to the point that later in life she expressed herself “eternally grateful to him” for having shown her the “Mystic Way”.

A significant interest in spiritualism developed after the vast carnage of the First World War and Aelfrida’s reputation as a medium was enhanced when she developed a sort of supra-natural relationship with Grantchester war poet Rupert Brooke, who had died in 1915. Aelfrida’s automatic writing produced a new poetic collaboration and a letter to his mother (Brooke apparently providing the address in his paranormal state). As well as being a mediumistic cypher Tillyard went on to become a “Straightener”, or soul-doctor. Lectures, patients, sessions and admirers came her way.

Hints of a Perfect Splendour by Sheila Mann is published by Wayment at £25 and is available from Heffers and David’s Bookshop in Cambridge. 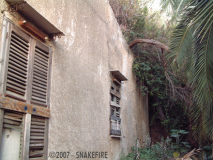