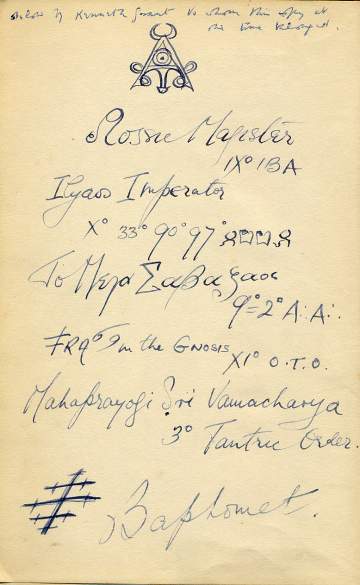 An highly significant association copy of the first edition of Crowley’s magical novel, Moonchild, written in 1917 and first published by Mandrake Press in 1929, formerly owned by Crowley’s ‘heir apparent’. Its plot involves a magical war between a group of white magicians, led by the protagonist Simon Iff, and a group of black magicians over an unborn child. Moonchild is a novel held in high regard for its magical and occult significance and also for its complex and well written prose.

The present copy has autograph annotations by Grant on about 32 pages, many supplying the real names of the characters (Isadora Duncan, Will Rothenstein, Bergson, W.B. Yeats etc.) and also including other remarks such as biographical details and notes of professions and job and corrections to the printed text. Of particular significance are the elaborate calligraphic inscriptions giving the (claimed) secret magical mottoes (crytonyms) and claimed degrees of Grant and his wife, Steffi, on both sides of the front endpaper (the recto somewhat browned). A note at the head of verso identifying the book as Grant’s copy, is in the hand of Gerald Yorke.

There are other more revealing notes as well: ‘painted very badly’; ‘Roy something – I suspect he was a Nancy of E.F.’s’; ‘I used to avoid “I” “me” “mine” etc both in writing & speaking, as a “practice”‘; ‘This incident is elaborated from an actual episode in the career of Herbert Close – “Meredith Starr”‘; ‘Actually a rascally adventurer’; ‘She was the bastard of a wealthy Londoner; he made her a small allowance a week, I think’; ‘she was the brains behind Mabel Collins plot to expose H.P.B. I achieved quite a fair amount of success.’ ‘Walter Duranty, who took her over after A.C. had gone off somewhere.’

The former owner of this copy, Kenneth Grant (1924-2011), Brother Aossic, of whom Crowley was to write: ‘Value of Grant. If I die or go the the USA there must be a trained man to take care of the English O.T.O.’ He was Crowley’s personal secretary, an important editor of Crowley’s books, and later founded the Typhonian Order. He attended Crowley’s cremation in 1947. Grant and John Symonds edited Moonchild for publication in 1974. Grant also wrote books on Crowley and Austin Osman Spare.

We are indebted to William Breeze for his assistance in cataloguing this book.