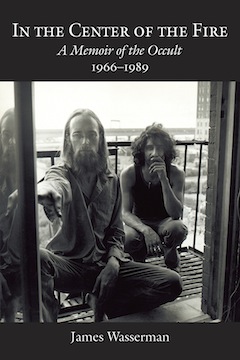 Coming 15 June from the incomparable James Wasserman: In The Center of the Fire…

A stone’s throw away from the Velvet Underground and Andy Warhol’s Factory, William Burroughs’ “bunker,” and the legendary Chelsea Hotel was a scene far more esoteric than perhaps even they could have imagined. In this daring exposé by a survivor of a unique era in the New York occult scene, James Wasserman, a longtime proponent of the teachings of Aleister Crowley, brings us into a world of candlelit temples, burning incense, and sonorous invocations. He also introduces us to the company of such avant-garde luminaries as Alejandro Jodorowsky, Harry Smith, Kenneth Anger, and Angus MacLise.

The author, the founder of New York City’s TAHUTI Lodge of Ordo Templi Orientis, traces its early history and provides a window into the heyday of the Manhattan esoteric community—centered around Samuel Weiser’s Bookstore and the Magickal Childe. In addition, he meticulously chronicles the copyright contest over the Crowley literary estate, of which he was an important participant. Finally, he breaks decades of silence concerning one of the most seminal events in the development of the modern Thelemic movement — detailing his role in the 1976 magical battle between Marcelo Motta and Grady McMurtry. Long slandered for his effort to heal the temporary breach between the Orders of A.’.A.’. and O.T.O., James Wasserman sets the record straight.

This is a saga with a very human tableau filled with tender romance, passionate friendships, an abiding spiritual hunger, danger, passion, and ecstasy. It also explores several hidden magical byways including the rituals of Voodoo, Tibetan Buddhism, and Sufism. Finally we are given a bird’s eye view of the 1960s hippie culture and its excesses of sex and drugs, and rock ‘n roll—along with an account of some of the personal transformations and penalties such a lifestyle brought forth.

Reconstructed from personal memories, magical diaries, multiple interviews, court transcripts, witness depositions, trial evidence, and extensive correspondence, this book elucidates a hitherto misreported and ill-understood nexus of modern magical history. It also shares tales of a mythical moment in American life as seen through the eyes of an enthusiastic participant in the counter-culture of the day.

Advance Praise for In the Center of the Fire.

“A compelling portrait of a moment in time when New York City served as the heart of the modern Occult Renaissance.” —Donald Weiser, Samuel Weiser, Inc.

“Provides a rare glimpse into the life of a genuine spiritual adept. The sincere search for wisdom can lead a man to places where few would dare tread. But James Wasserman marches forward—moving through adversity—sometimes with grace, other times with raw force, but always in pursuit of the light of human liberty. A magnificent true story of what can happen when spiritual teachings are taken seriously and applied skillfully.” —Daniel Pineda, author of The Book of Secrets

“‘Our stone is fire, created out of fire and converted into fire; its soul dwells in the fire.’ This alchemical axiom describes the Philosopher’s Stone, that elusive symbol of the supreme transformative substance produced by the Great Work which changes impure lead to Gold. In this intensely honest account, the author makes no attempt to varnish truth with platitudes, but demonstrates that the fire is life; and that both success and failure are teachers and bringers of wisdom. This gem of historical narrative also casts light on many misunderstood moments in the modern development of Thelema. ‘Whosoever is near to me, is near the fire’ (The Gospel of Thomas).” —J. Daniel Gunther, author of Initiation in the Aeon of the Child

“Your book ends at exactly the point when I joined O.T.O. I read your Diary of an ex-Drug Fiend article while waiting in the antechamber for my Minerval initiation. The honesty and morality expressed there became among the most important influences on my career in O.T.O since. I can never thank you enough.” —Email from Rodney Orpheus, author of Abrahadabra and The Grimoire of Aleister Crowley

You may also order directly from the publisher:

And please visit the dedicated website for more information: inthecenterofthefire.com