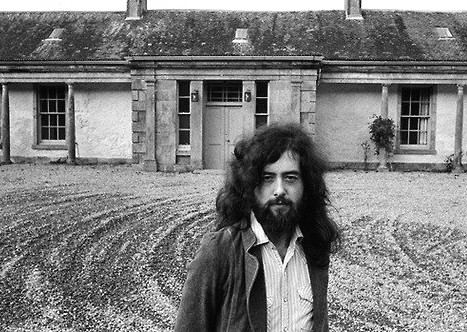 Occultist Aleister Crowley bought Boleskine House in the late 1800s. Led Zeppelin guitarist Jimmy Page may only have visited there a handful of times, but the rock god is forever linked to what has been dubbed “the most notorious home in the Highlands.”

Page bought Boleskine House on the southern bank of Loch Ness in the early 1970s, driven by his long interest in the work of Victorian occultist and magician of the black arts, Aleister Crowley, who lived there in the early 1900s.

Page went on to claim “bad vibes” ran through the 18th Century property, where he maintained the head of an executed man – believed to be Lord Lovat who fought with the English during the 1745 uprising – could be heard rolling around the floor.

The musician was to feature Boleskine in The Song Remains the Same, the documentary which followed the band on their 1973 tour of the States.

In one scene, Page’s eyes glow devil red before it cuts to a shot of dense woodland, lit by the moon, with the guitarist climbing to the top of a mountain to the soundtrack of Dazed and Confused, where he meets a hoooded creature holding a lantern.

Page was to ask his childhood friend Malcolm Dent to be the caretaker of Boleskine House, which was owned by the musician for 20 years. Mr Dent lived there happily, raising his family, until Page sold-up in the early 1990s.

In a 2006 interview with the Inverness Courier, Mr Dent, who died in 2011, said he and his wife and children had loved living there, despite the “curious” goings on.

Mr Dent, described himself as a sceptic but said there were things at Boleskin that could not be explained.

He said: “Doors would be slamming all night, you’d go into a room and carpets and rugs would be piled up.”

Another regular occurrence was that the back door, inside doors and kitchen doors would suddenly spring open as if someone was running through them, even on calm days.

“We just used to say that was Aleister doing his thing,” Mr Dent said.

Crowley, aged just 25, bought Boleskine in 1899 after looking for the right location to carry out a series of rituals from the Book of Abramelin. It was a text central to Crowley’s new religion Thelema, which he believed would help him make contact with his holy guardian angel.

He reportedly required “a house in a more or less secluded situation” with a door that opened to the north from where the oratory could be delivered. From there, Crowley planned to banish the demons once they had been summoned to a terrace, which would be covered in ‘fine river dust’.It is said Crowley had to leave Boleskine on business before the full operation – which could take up to six months- was concluded, with the so-called demons left gathered at the loch-side home.Of his experiments in the Highlands, Crowley – who styled himself Laird of Boleskine and Abertarf – wrote: “The demons and evil forces had congregated round me so thickly that they were shutting off the light. It was a comforting situation. There could be no more doubt of the efficiency of the operation,”It is said those living in the area around Boleskine long avoided the estate where Crowley made his home and were terrified of the work of “the wickedest man in the world”, as he was often referred to by the press of the day.With plenty of myth and superstition surrounding the property, it is said the consequences of Crowley’s time at Boleskine were long felt, with several personal tragedies associated with the house.One employee of the estate attempted to kill his wife and children, it was claimed in Crowley’s diary. His lodge keeper, Hugh Gillie, suddenly lost his two children in sudden, unexplained circumstances.

A housemaid is said to have gone made with a local butcher cutting off his hand while dealing with Crowley’s order.

In 1960 the new owner of the property, Major Edward Grant, killed himself with a shotgun in the bedroom that had been used by Crowley for many of his satanic rituals.

While unconfirmed tales about Boleskine’s past keep re-energising themselves, the property has enjoyed a quieter period.It is now owned by a Dutch couple, with signs to the driveway entrance making clear that Boleskine is a “strictly private” property – and those seeking a glimpse of the place will not be welcome.

Always with the satanic rituals..