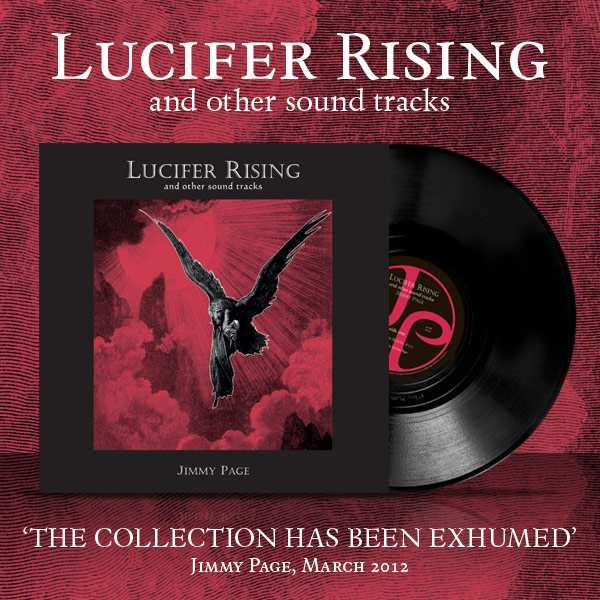 Jimmy Page has announced the imminent release on vinyl of his wonderful ‘Lucifer Rising’ soundtrack… Anyone doubting Jimmy’s continued interest in Thelema need only note the limitation numbers.

A SPECIAL ANNOUNCEMENT FROM JIMMY PAGE

“On March 20th, the Spring Equinox 2012, the title music for Lucifer Rising and Other Sound Tracks will have its premiere and release. The title music, along with other musical pieces recorded at my home studio in the early Seventies, have been revisited, remixed and released for the first time. This is a musical diary of avant-garde compositions and experiments, one of which was to appear on the film ‘Lucifer Rising’. The collection has been exhumed and is now ready for public release. This will be available exclusively on the website.

There will be a standard release on heavyweight vinyl.

In addition there will be a special run of 418 numbered copies. The first 93 copies will be signed and numbered.

There are liner notes and commentary to each track. The tracks are:

There are three versions of Lucifer Rising available:

‘Lucifer Rising and Other Sound Tracks’ will be available exclusively from JimmyPage.com at 14:00 GMT (UK time) on Tuesday 20th March 2012.

As with Death Wish II, we anticipate a high volume of traffic to the website on release day and, while we shall provide additional hosting support, we appreciate your patience in advance if JimmyPage.com is slower than normal during this period.

Visit JimmyPage.com at 14:00 GMT on Tuesday 20th March 2012 to buy ‘Lucifer Rising and Other Sound Tracks’.

In addition to the standard release of ‘Lucifer Rising and Other Sound Tracks’ there will be a Deluxe edition of the album available, limited to just 418 copies. The Deluxe edition is distinguishable from the standard album by its subtle artwork variations and each copy is individually hand-numbered.

Jimmy Page has signed the first 93 copies of the Deluxe edition.