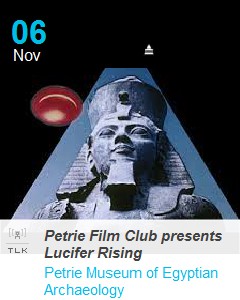 Lecture on Kenneth Anger, Aleister Crowley, and Egyptology at the Petrie Museum

In October 2013 Ethan Doyle White attended the UCL conference on Monstrous Antiquities: Archaeology and the Uncanny in Popular Culture, and presented a paper on the subject of Archaeology and Occultism in the Work of Kenneth Anger. In this he examined how the renowned American experimental film-maker utilised past societies in proselytizing for the occult religion of Thelema, founded in 1904 by the (in)famous British esotericist Aleister Crowley. In doing so, Anger made repeated use of archaeological material, particularly that associated with Ancient Egypt, and thus much of his ouevre represents a fascination avant-garde example of what has usually been termed ‘Egyptomania’.

Ethan has been invited to give a lecture on this subject for the Petrie Museum of Egyptian Archaeology in Bloomsbury, Central London, as part of their Petrie Film Club Presents series.

Scheduled for Thursday 6 November at 6pm, Ethan will be introducing a screening of Anger’s seminal film Lucifer Rising (1980), an exposition of Thelemite theology that was filmed at such archaeological sites as Luxor, Karnak, Avebury, and Externsteine.

Those interestested in coming along must obtain a ticket beforehand, and should be directed over to the Museum’s events page, where all the necessary information can be found; tickets themselves can be obtained through Eventbrite. Admittance is free, although a donation of £5 is requested.