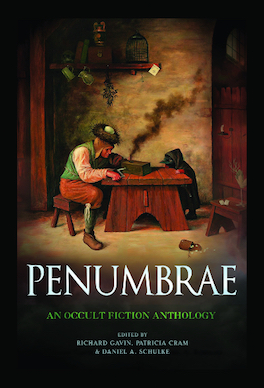 THREE HANDS PRESS is proud to announce Penumbrae, a collection of thirteen works of Occult Fiction.

The locus of this anthology lies in tales that embody a metaphysical position, as opposed to fiction that merely employs metaphysical trappings to enforce a materialist worldview. Occult fiction, by contrast, strives to evoke the energies that inform such symbols, and create a vital experience for the reader. Far beyond mere description, this is work that proves its value through its capacity to seduce, captivate, and incept states of magical consciousness. Like the practice of magic itself, the finest works of occult fiction will be distinguished by their power to evoke an embodied experience, and to tangibly compel shifts in consciousness while arousing the uncommon. It intoxicates the rite of reading as much as it permeates the spaces between readings.

Marriage between the objective and the imaginative often results in an enrichment of existence. All spiritual traditions stand upon a foundation of both worldly Act and transcendent Idea. Idea becomes Image, Image becomes Symbol, Symbol becomes Portal. Through the Act of passing through it, one is thereby transformed. It thus stands to reason that the annals of occultism are lush with fable, poetry, mythology, and tales. A delicate but highly potent quality of this work is the creation of a spirit-trap wherein the words and images themselves act as hosts to the experience itself. Under auspicious conditions, a reader may encounter a tale that hews so closely with their own interior universe that a Key is thereby given.

We are now accepting pre-orders of what will no doubt prove to be a very popular title. Penumbrae is available in two editions:

Pre-orders may be made at this time by sending payment to us via PayPal:
books@threehandspress.com