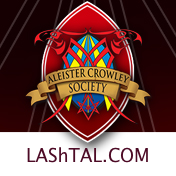 Now is an appropriate time to remind visitors that this site is intended to provide a non-partisan and non-judgmental source of information relating to Thelema, especially news of Thelemic culture.

It would be inappropriate, however, to make any assumptions in respect of the religious and spiritual beliefs of those connected with the design and content of LAShTAL.COM.

Also, as owner, compiler, designer and chief bottle washer of lashtal.com I can confidently state that this site is in no way “official” – whatever that really means in a Thelemic context. It is maintained by me alone.

Just for the record, I am not currently a member of any magical or Thelemic organisation. I am, though, in contact with senior members of most of the obvious Thelemic groups and have, without exception, been impressed with their courtesy, generosity and willingness to help.

LAShTAL.COM is very much a “labour of love” under will. I have studied Thelema and the works of Aleister Crowley for almost three decades. Not one day of those nearly thirty years has passed without being enriched by both. Growing frustrated by the difficulty I experienced in locating information about Thelemic culture and, of course, Aleister Crowley in the media, this site arose from an assumption that others might feel the same. More than 850,000 hits since the end of September 2003 and about 20 emails a day suggest I was not mistaken.

I have no axe to grind, no enthusiasm for proselytizing – just a great admiration for the creative work of Aleister Crowley, a fascination with his life and the lives of his followers, a love of the work of several creative individuals influenced by him (Jimmy Page, Kenneth Anger and early Psychic TV are obvious examples), and a deep respect for the philosophy and religious/spiritual ideals of Thelema.