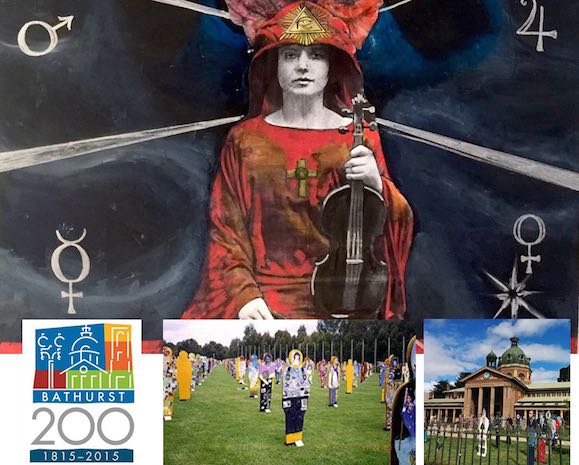 The art guild of Ordo Templi Orientis, Collective 777, recognised one of the 20th century’s most important occultists at the Bathurst bicentenary celebrations over the weekend. In a joint project with OTO New Zealand and the Grand Lodge of Australia, the guild installed a life-size figure in the town centre of local violinist, LEILA WADDELL. The figure is one of 200 in the “People in Time” project celebrating the contributions of Bathurst people from all walks of life over the past 200 years.

Born 1880, Leila was a darling of the Bathurst and then, Sydney classical music scenes from an early age. She knew success internationally touring throughout Europe and the Americas as well as New Zealand and Australia and become known locally as “the girl who fiddled her way around the world.” While she referred to herself as a “versatile” player, music critic and then Dean of Music at Sydney University, Gerald Marr Thompson recalled, “Besides possessing an excellent technique, Miss Waddell’s style as a violinist was particularly marked by charm and refinement.”

A student of violin greats Leopold Auer and Emile Sauret, Leila Waddell played on an Amati gifted to her by Sauret “in burst of warm admiration” after learning his Etudes off heart. She also owned what she considered to be “the best Guadagnini in the world.”

Early in her travels to London, Waddell met and fell in love with English occultist, ceremonial magician, and poet, Aleister Crowley. She joined the fraternity Ordo Templi Orientis (O.T.O), one of the most important and influential fraternal orders of the modern age and went on to become a significant figure in that organisation. She is credited with co-authorship of magical tome, Book 4, along with Crowley and she is likely to have been the first Priestess in a Gnostic Mass – a sacramental rite celebrated that honours the feminine in an ecclesiastic context.

One reader of The Bathurst Times wrote to the editor at the time:

“It is good for Bathurst that her children should accomplish big things in the outer and bigger world, and it is good for ourselves that we should be delighted with our children’s successes. Bathurst is proud of her daughter, Leila Waddell, and as loyal members of the family of Bathurst born, and those who make our city their homes, we welcome back to her native land one of whom the whole family is, pardonably, very proud.”

The Peoplescape exhibition will run until 18 May and may be found at Kings Parade, Russell Street, Bathurst.