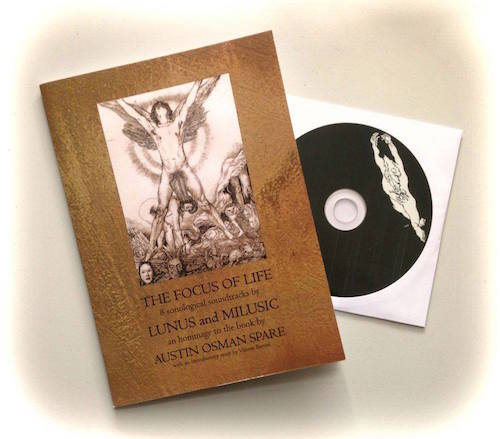 8 SONOLOGICAL SOUNDTRACKS BY LUNUS AND MILUSIC, AN HOMAGE TO THE BOOK BY AUSTIN OSMAN SPARE

A Book plus CD release: the 38 pages book comes with introductory essay by Vittore Baroni, and reproduction of the work of A.O.S. from Focus of Life, authorized by the literary executor Steffi Grant, plus Italian translation.

From the intro by Vittore Baroni:

‘Over the years, Migliussi has made admirable efforts to promote the peculiar work of this artist-writer-magician-philosopher through reviews, essays and excellent authorized translations. Now Roberto has decided to confront A.O.S. in an innovative way, through recordings taken from The Focus of Life: in order to return from the printed page back to the corporeal, the esoteric/oneiric text must in fact be activated – as with any magic spell – by means of declamation.

‘The word comes to life also thanks to the musical magick of deviLs Granziera, a veteran of the electronic experimental scene well experienced in this kind of material and who therefore knew how to support the reading, accompanying it with breezy melodic lines and inner ritualistic rhythmic patterns.

‘Just as with the psycho-geographical sermons of Alan Moore, it is necessary here to seal the union of text and sound by means of arrangements which allow the words to reveal themselves without distortions, in a tradition of “spoken word” collaborations ranging from Timothy Leary/Ash Ra Tempel to Hakim Bey/Bill Laswell…’

LUNUS is a nom de plume used by Devis Granziera, Italian industrial/noise underground musician who started his activities in the early 1990s.

He is more known for his notoriuous Italian act TEATRO SATANICO.

MILUSIC aka Roberto Milusic Migliussi, was the founder of the influential fanzine/magazine IDOLA TRIBUS in Italy during the mid ’80’s. He has spread in the same land the knowledge of Austin Osman Spare translating and publishing privately the most important works of him. He has translated also works by Kenneth Grant, Zivorad Mihajlovic Slavinski, and many others. He is involved in the process of music, drawing and magick.

Orders can be placed here: roberto@labirintostellare.org

1. IN THE ECSTATIC LAUGHTER OF MEN
2. CAST INTO DEMONIACAL MOULDS
3. SERVE NO MAN, HELL IS DEMOCRACY
4. GOD IS A PRECOCIOUS CREATION OF THE APES
5. THE HEAVEN OF AAOS
6. AAOS AND THE UNDERTAKER
7. THE DEATH OF TZULA
8. THE DREAM THAT CAME TRUE