The Publication Of It’s Rituals.

In the Court Of Appeal, before Lords Justices Vaughan Williams, Moulton, and Farwell came the case of “MacGregor V Crowley” which was an appeal by defendant Mr. Aleister Crowley, against an order by Mr. A. Neilson, for defendant, said that the order appealed for an injunction restraining the publication of the third number (22 March) of a magazine called “The Equinox” of any matter relating to the secret forms, rituals or transactions of a mystic order know as the Rosicrucian, of which plaintiff claimed to be the head chief. Plaintiff also in his affidavit stated that besides being the head or chief of the order, the exclusive copyright of the rituals and ceremonies and the manuscripts of the order were vested in him, he being the founder and compiler of them, and he claimed such an interest in the same as would entitle him to restrain any infringement of the rights therein.

OBJECTS OF THE ORDER.

Defendant was the proprietor of “The Equinox” No.2 was published in September, and there was commenced in it a series of articles entitled “The Temple of Solomon the King” and the articles were intended to be continued in No.3, which was intended to be published o­n March 22. The counsel submitted that the injunction should be dissolved, because of the writ and affidavit ,by plaintiff, it was plain that there was no cause of action disclosed. His next point was that he could satisfy the court that plaintiff knew all about the matters of which complaint was made o­n Nov. 11 and the writ was not issued until March 11, o­nly ten days before the day the magazine was about to be published. Lord Justice Moulton inquired against who the injunction was granted. – Mr. Whately “Against the editor of the magazine”. Lord Justice Moulton asked what were the tenets of the order.- Mr. Whately replied that it was instituted for the study of the mysteries of philosophy and antiquity.

Lord Justice Farwell asked Sir Fdk. Lawrence, R.C; who with Sir P.RoseInnes appeared for plaintiff (Comte Liddell MacGregor) what harm would likely to be done by the publication of the matters in question.-Sir Frederick replied that it would do irreparable harm, for the cat would be out the bag {laughter}.- Lord Justice Farwell “It seems to me that it is a dead cat. {laughter}.– Sir Frederick “Perhaps there is a second cat in the bag, my lord”{renewed laughter}.- Counsel asked that it was defendant had threatened to publish a perfect account of the “initiation of the ritual” that the application for an interim injunction was made. – Lord Justice Vaughan Williams, o­n giving judgement, said the injunction must be dissolved as the application ,made as it was o­n the eve of the publication of this number of the magazine, was made too late. – The Lords Justice concurred. 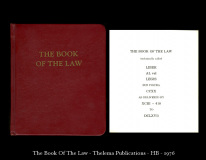