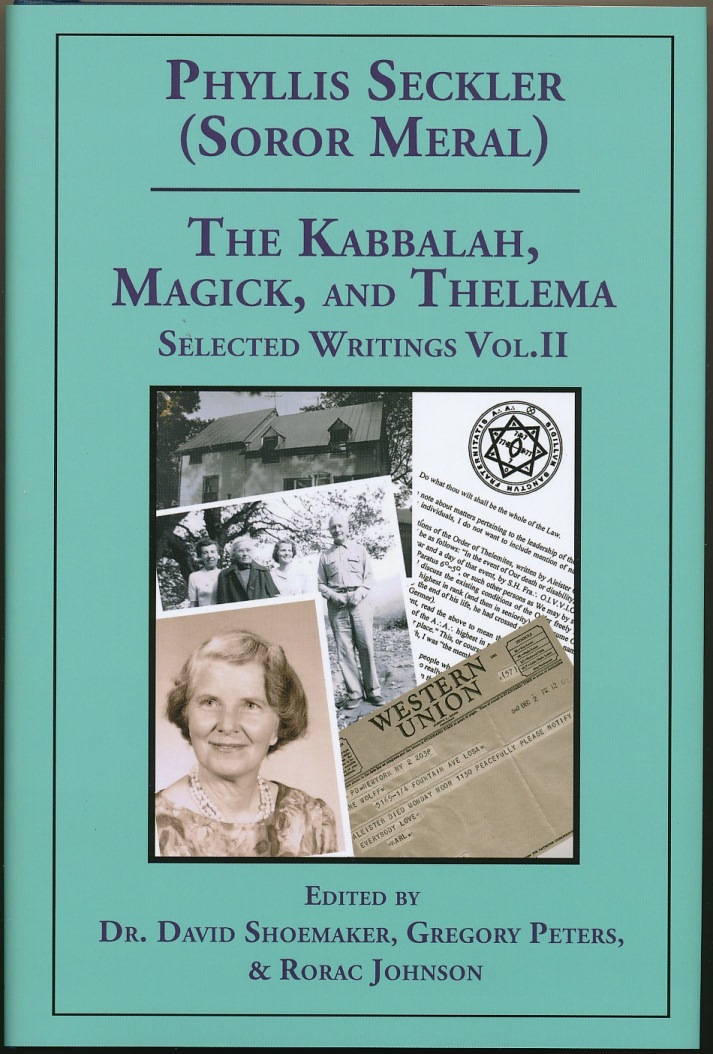 From the College of Thelema of Northern California in conjunction with The Teitan Press:

Phyllis Seckler (“Soror Meral:” 1917-2004) was introduced to the teachings of Aleister Crowley in the late 1930s and became a regular participant in the activities of Agape Lodge of the Ordo Templi Orientis in California, and rose to become a Ninth Degree member of the “Sovereign Sanctuary of the Gnosis,” and an Adeptus Minor of the A.’. A.’. The Kabbalah, Magick, and Thelema is the second volume of writings by Phyllis Seckler to be published by the College of Thelema of Northern California in association with The Teitan Press. Like the first volume, this collection is edited and introduced by three of Seckler’s former students: Rorac Johnson, Gregory Peters, and David Shoemaker, but this second volume additionally includes a short Foreword by one of her best-known early A.’. A.’. students, Lon Milo DuQuette.

In common with Crowley, Seckler found short, pithy essays, written in the form of “letters,” to be an excellent and powerful teaching method, and the main body of this work comprises a series of these letters, covering diverse topics from kabbalah and the practice of ritual magic, through philosophy and spiritual enquiry to commentary on the Thelemic culture of the time. Originally published in Seckler’s journal “In the Continuum,” they are here presented for the first time in book form, accompanied by redrawn and corrected diagrams. The book also reproduces a number of important letters that passed between Seckler and other significant figures in the history of post-Crowleyan Thelema, including Karl Germer, Israel Regardie, Grady McMurtry, Gerald Yorke, and Marcelo Motta. These letters, which cover matters as varied as the leadership succession of the O.T.O. and the thefts at Karl Germer’s library, are published here for the first time, as are a number of related photographs.

For one week only copies of the The Kabbalah, Magick, and Thelema will be available at the reduced price of $45.00 each (plus shipping) and will come with a bookplate signed by the three editors tipped onto the front free endpaper. This offer only applies to copies bought and paid for before midnight (US EST), Tuesday June 26th, 2012.

Please note that we also have signed copies of Richard Kacyznski’s Forgotten Templars (a very large and heavy book), and Jim Wasserman’s In the Center of the Fire and those who might wish to order these in conjunction with Seckler’s The Kabbalah, Magick, and Thelema would of course achieve a certain economy of scale in postage.