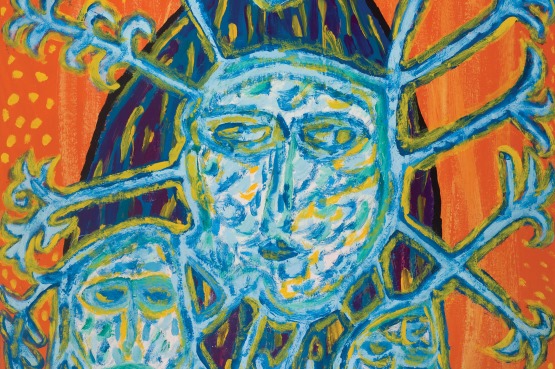 Michael Bertiaux, artist, and the author of the acclaimed Voudon Gnostic Workbook and the recent Ontological Graffiti, is our guest in podcast episode 172. This interview was created in collaboration with our friends at Black Lotus Kult.

“Michael Bertiaux, author of the famed Voudon Gnostic Workbook and Hierophant of the Voudon Gnostic Current is a rare visionary in modern occult studies. Raised in a liberal theosophical household, he was drawn to the esoteric and spiritual approach to religion and Being from early on. After studying philosophy in New Orleans and having been ordained as a Deacon in the Anglican Church, Bertiaux was sent to Haiti in 1963 where he taught philosophy and was in charge of the local Anglican museum. It was on “the magic island” that Bertiaux met his spiritus rector, Dr. Jean-Maine, who initiated him into the secrets of the Voudon Gnosis. His close collaboration with Jean-Maine, first in Haiti and then later in Chicago lasted until the Voudon master’s death in the early 1980s… Bertiaux stands unique in the spiritual world. His system of occultism and gnosis is unlike any other. Instead of reworking the occult past and clinging to classical theories, he works mainly on gnostic-radionic lines and esoteric creativity. Deeply rooted and based in the magical world and traditions of Esoteric Voudon … Bertiaux has managed to introduce a great number of other spiritual currents into his system… To unite areas so seemingly apart as German Idealism and theosophy, to Shinto and Bon-Po, Bertiaux has spun a metaphysical web connecting and bringing them into occult harmony through the threads … of Esoteric Voudon… To aid in this … metamorphosis Bertiaux also stresses the creative aspects of magic and gnosis. In addition to being a writer and philosopher, he has produced many “evocative” works of art, including paintings that have been used as magical instruments and gateways to the spirit world. He has not only greatly influenced contemporary occult circles and individuals such as Kenneth Grant of the Typhonian OTO, the Chaos magick scene, and Gnostic circles, but also musicians and artists…”