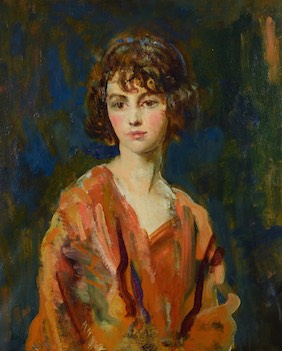 From today’s The Telegraph:

The big surprise last week was at Dreweatts in Berkshire, where a bidding war broke out over the portrait of an attractive, unidentified young woman by the society painter Ambrose McEvoy, who died in 1927. Although mentioned by art historians in the same breath as his fellow Slade School of Art students Augustus John and William Orpen, McEvoy has never exactly set the salerooms alight, and this portrait carried a tame £700 estimate. But such was its allure that it soared over the estimate, more than doubling the artist’s previous auction record to sell for £41,216.

[…] The sitter was the aristocratic British silent movie star Lois Sturt, a “wild child”, according to her biographer, William Cross, and “the brightest of the bright young things” who, born in 1900, burned herself out and died at the age of 37.

[…] In 1920, when the Dreweatts portrait was painted, Lois was debutante of the year. Described by Barbara Cartland as “fiery, impetuous and with dark, flashing eyes”, and by the artist Wyndham Lewis as “the most beautiful debutante of her day”, she became a fixture on the London party circuit: she was a “flapper” who drove an open-topped car about town, breaking speed limits, and was seen at all the most fashionable night spots. […] In the early Twenties, Sturt starred as Nell Gwynn in the silent film The Glorious Adventure, and learnt to fly an aeroplane… She married the Hon Evan Morgan, the homosexual son of Viscount Tredegar, who threw wild parties at his home, Tredegar House in South Wales, and consorted with the sinister occultist, Aleister Crowley, known as “the Beast”, or “the wickedest man in the world”.

The couple never consummated their marriage, and agreed not to interfere with each others’ affairs. After they separated, Lois went to Belgrade, where she died of a heart attack brought on, it is thought, by the overuse of alcohol and slimming pills.