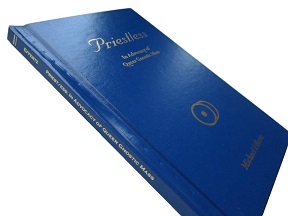 Part pamphleteering and part scholarly exegesis, PRIEST/ESS harkens back to the “mirrors for princes” literary tradition and offers in-depth philosophical, magical, sociological and historical analyses of gender roles in the central ceremony of Ordo Templi Orientis with an aim toward motivating the reformation of O.T.O. policy to openly embrace queer celebrations of the Gnostic Mass. By raising the discourse, the author endeavors to raise the reader’s expectations of what is possible within and through the Gnostic Mass while delineating what is lost when queer Gnostic Mass is restricted to the closet.

In addition to a series of original essays, PRIEST/ESS includes a robust and suggestive collection of citations from the source material, including the diaries of Aleister Crowley and the writings of Sabazius, current National Grand Master General of United States Grand Lodge O.T.O.

This privately issued edition of 44 numbered copies is hardbound in sapphire blue leatherette with gold foil stamp. 108 pages printed on 70 lb paper. Of the 44 copies, 30 were bound with gold ribbon markers, the remainder with red ribbon. This private edition was circulated within and without the O.T.O., with copies provided to each of the three principal officers of O.T.O. International, many key officers of U.S.G.L. O.T.O., and every O.T.O. Lodge in the United States.

While PRIEST/ESS directly addresses the O.T.O., its peerless exploration of gender and sexuality in the Gnostic Mass specifically and Thelema generally makes it an item of historical interest for Thelemites worldwide. Due to public interest, a trade edition is in preparation. In the meantime, visit your nearest Lodge or contact U.S.G.L.’s current librarian to read this limited and unprecedented work.