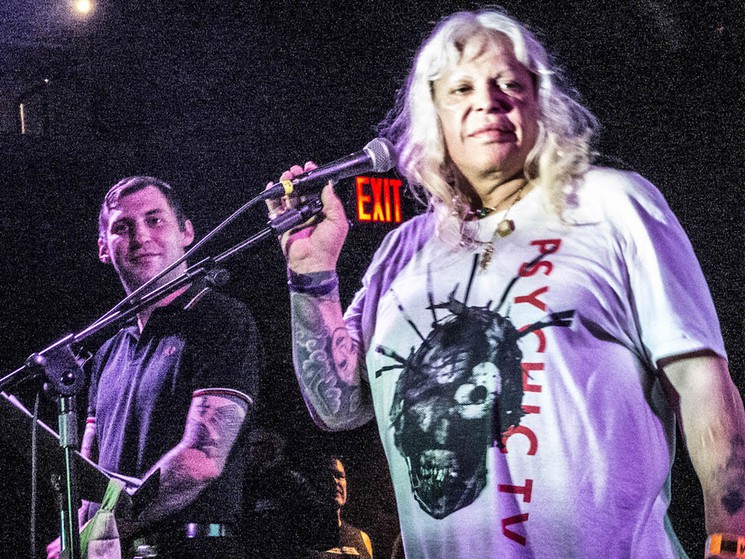 Long out of print, Force the Hand of Chance (which is finally being reissued on expensive vinyl) starts with the beautiful lullaby “Just Drifting,” patterned on a gorgeous melody much closer to The Kinks’ “Village Green” than to Throbbing Gristle’s “Hamburger Lady.”

A lush acoustic guitar opened the show, and the large crowd collectively swooned when Genesis started crooning the heartfelt lullaby s/he wrote for h/er daughter Caresse. “I’ve been hearing that voice for decades,” beamed a usually cynical local scenester. Genesis seemed actually bemused that they were pulling it off, as the rest of the instruments joined in.

The mood immediately changed with the lengthy second track, “Terminus,” a story-song with a repetitive motif that can be best described as White Light/White Heat-era John Cale arranging a Sergio Leone spaghetti Western soundtrack. This segued into Force the Hand’s other unabashed “pop song,” the sugary “Stolen Kisses,” with comedian Margaret Cho performing the backing vocals originated by Soft Cell’s Marc Almond on the album.

Source: Psychic TV’s Debut Album Force the Hand of Chance Gets Performed in Its Entirety at Berserktown | L.A. Weekly

One of my favourite albums. I envy those lucky enough to see it performed live. Not too sure about the article’s reference to “Aleister Crowley’s ‘The Secret’,” though…