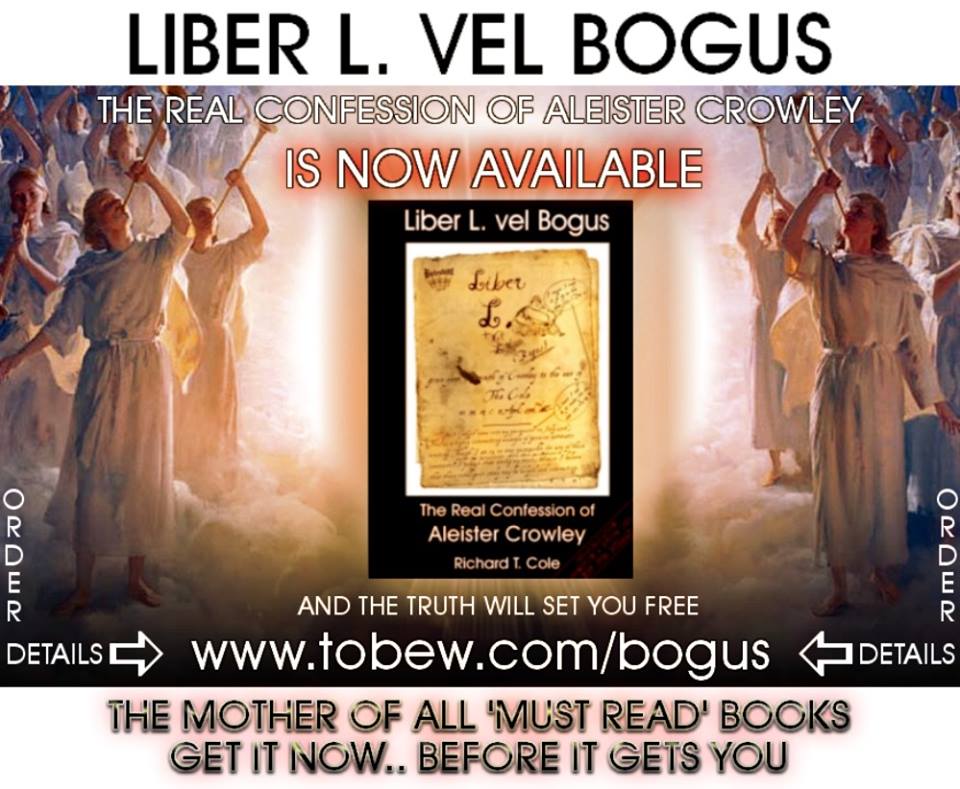 My sincere thanks to the highly regarded Mogg Morgan (Mandrake of Oxford) for his insightful review of Richard T Cole’s forthcoming book, reproduced here by kind permission…

Richard T. Cole — Edited by Sadie Sparkes — Publication date 1st April 2014 — Although as yet no price.

Given the publication date and the author’s known propensity for the odd spoof a certain amount of caution is advised. I was lucky to receive a pre-publication review copy with an informative comps slip with a note: ‘Mogg – One for the Thelemic Anorack Anoracks? It’s an inverted Whodunnit with very best wishes yours RC.’

Not sure I quite qualify these days, odd thing is despite the publication date the book is still hard to come by, almost as if Richard is trying to create a buzz and boost sales but somehow I think the target audience is quite small – after all, if I was a beginner to magick, what would I make of the title, or why would I be interested in what is a product for anoraks, i.e. nerdy Crowley fans? The compliments slip summarizes the contents as ‘To my mind, it appears almost certain that there was no “cross examination” of Rose, no Boulak visit, no Reception, No Aiwass, no Book of The Law, no lost manuscript and no Thelema. All were fantasies conjured from the mind of an obsessive psychopath, in furtherance of his grand delusion of “I Crowley, the Chosen One”.’

Having read most of the book thus far, I think the above is still largely unproved. Or perhaps, I’d more agree with another commentator who says: ‘Well, that’s hardly a surprise! You never, seriously, believed Crowley’s story than an angel flapped in on his honeymoon with a New World Religion T-shirt and “Chosen One” badge… Did you?’ (Cole : 15) We are talking about the foundation narrative of a new religious movement called Thelema, whose holy book, Liber Al Vel Legis, was supposedly channelled to Aleister Crowley following a series of mysterious events in Cairo, Egypt, in 1904. Personally I always thought it pretty obvious that this foundation myth had been worked over by Crowley; to me the channelled text is clearly written in his style.

But there again, having studied a lot of religious inspired texts over the years, wouldn’t it be naïve to expect anything different? I’d say it’s the way all religious texts are generated, part inspiration, part perspiration. One of the key pieces of evidence RC points to as part of this post revelation working over is the typing paper used by Crowley, acting as amanuensis, to scribe the text. Cole contends that he has proof that this paper was not widely available in 1904. Given how much he reads into this fact, it’s rather odd that the promised definitive proof, presumably a letter from the Wiggins Teape archive, is not reproduced in the present book! It is instead held over for a slated volume two! That is, as they say, a bit like someone knocking on the front door just as one is about to sit down for dinner, it just won’t do (there is a ruder version of this metaphor). The proper place for that “evidence” is surely in this present volume?

Even if we accept some of this working over of the sacred text is highly likely, then it is not a killer fact. Examples that spring to mind? Well, perhaps the Pentateuch which is supposedly written by Moses, who dutifully recorded his own death in the final verses of Deuteronomy 34! Perhaps someone finished that bit off for him? Or Yeats and Georgie Hyde Lees who made a magnificent series of trance sessions as recorded in the volume ‘A Vision’. But there is obviously some working over of the material, and notes of the first few communications were so unimpressive, they did not even bother to keep them.

Caroline Tully has written something on this that deserves to be better known. In an article in ‘The Pomegranate’ (2009 20-47) called ‘Walk like an Egyptian: Egypt as Authority in Aleister Crowley’s Reception of The Book of the Law’ she also identifies the imperatives laid upon all western magical adepts to form a contact with ‘The Secret Chiefs’. And in most cases this means travels to the land of eastern promise, either Egypt or India, and to receive a revelation. If this doesn’t happen spontaneously, one has to make it happen. As Tully concludes: ‘Crowley was less interested in Egyptian culture, aesthetics or religion than in the power he could extract from association with its venerable antiquity. His accurate assessment of the spiritual clout possessed by ancient Egypt in the eyes of his peers meant that regardless of the actual function and meaning of Egyptian material culture, the simple fact of its Egyptian nature provided him with spiritual credibility and prowess.’ (Tully 2009 : 44)

I’d say Crowley is very much in that tradition, although Cole does a good job in exposing how Crowley’s psychology was seriously flawed, motivated not so much by some mystical quest, as more by spite and a desire to hit back at his one-time mentors in The Hermetic Order of The Golden Dawn. His declaration of war on Mathers, the head of the London Order, does, with hindsight, look rather puerile.

Richard seems convinced that revealing the process of magical inspiration will for many be a deal breaker, especially when this is done for the Thelemic tradition; I’m not so convinced. I think it might actually lead to a more mature understanding of magick and gnosis. Forgive me, Richard, if you say that later in the book, which I suspect it is your point of view, but I’m not such an anorak that I could continue reading to the bitter end – too much detail for me. For those who like detailed textual analysis of Crowley’s oeuvre, there is plenty here to keep you busy.

From my own experience and those of other contemporary magicians interested in this approach, I say that good insights often do have to be worked on later – as Jan Fries comments in his chapter on ”Automatic Writing” in his book ‘Visual Magick – A Manual of Freestyle Shamanism’, “automatic writing isn’t automatic” ; it is actually some sort of hybrid. I’d say the final result is what matters: is it or isn’t it valid?

On some of the other claims in the book I have similar ambiguous feelings. In the Crowley story he receives a magical instruction to go to the Boulac Museum where he famously finds the Stele of Revealing, item 666, the funeral stele of Ankh f n Khonsu. Only trouble is, so the author tells us, the Boulac Museum was actually closed in 1904! And indeed according to Richard Cole the Boulac had been closed since just after Crowley’s previous visit in 1902. Richard Cole believes 1902 to be the real date Crowley spied the famous artefact and made a note to include it in some future mythmaking. My problem here is that there appears to be some ambiguity about these dates. The current purpose built Museum of Egyptian Antiquities did in fact open in December 1902. The core of its collection came from the old Boulac Museum that had in fact closed several decades earlier dues to flood damage. It was for many years housed in another building called the Giza Museum and did indeed make its final move during 1902. It may even have been in packing cases ready for the move when Crowley visited early in 1902.

But what is more important is that it was still referred to as the Boulac, even after its move to the current location. To confirm some of these details I think one needs to look at Tourist’s Diaries of 1902, many of which are collected in a series called ‘Voyage en Égypte’. In the 1950s there was a celebration of the centenary of the Boulac in which it is confirmed that: in effect the name was so famous by then that it was still common to refer to the current collection as the Boulac. So Crowley may merely have been reflecting what was its common designation.

‘The first realisation of the Museum of Pharoanic Antiquities in Egypt, the ancient Boulac Museum, has found itself so intimately linked to the memorable works of Mariette in the domain of Egyptian archaeology, that it has acquired by this an imperishable renown.

‘The proof being that sixty years after its disappearance and the transfer of its collection to the Palace of Ismail at Giza, then ten years later their final installation in the sumptuous Palace Kasr-el Nil, the expression “Boulac Museum” has stayed with the majority of those who do not know the topography of Cairo, the designation, I would say almost the firm – the Museum of Egyptian Antiquities.’*

On the whole, Richard Cole has written a very spirited and enjoyable critique of Crowley and his seminal spiritual text. His contention that several elements of the foundation myth of Thelema were constructed by Crowley is feasible although not in my opinion fatal to the overall Thelemic project. Some of his machination remains obscure and Richard Cole’s killer fact concerning the provenance of the paper used to scribe the text will have to be taken on trust until such time as he publishes it. The issue of the Boulac and when exactly Crowley saw the Stele also seems unproved and there is no pressing reason to disbelieve Crowley’s account on this.