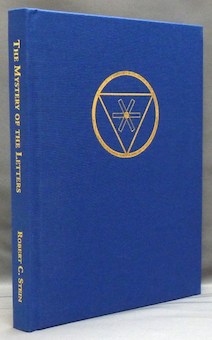 The Mystery of the Letters and The Tree of Life

The Mystery of the Letters and The Tree of Life is an important new contribution to Thelemic literature. It begins with an examination and analysis of the “Class A” texts of the Thelemic canon, with special emphasis on the manuscript and symbolism of The Book of the Law. The author, Robert Stein, reminds us that the prophet of Thelema, Aleister Crowley, declared that the manuscript of The Book of the Law (Liber XXXI) was unequivocally the first and final authority above all other Thelemic literature.

He surveys the mysteries and questions it poses, and encourages his readers not just to rely on a typeset version of the text, but also to study a copy of the manuscript, so as to derive a direct and personal understanding from it.

Stein then examines the symbolism of Thelema by comparison to archetypal messages expressed historically through god-forms, kabalah, trigrams (I Ching), Tree of Life models, and alphabets. He further proposes a three-dimensional Tree of Life, relates it to Tarot and the paths in Liber 231. The model originates in Liber Trigrammaton and the Cube of Space, but while based on historical material, it approaches the symbolism from a fresh perspective. The Mystery of the Letters and The Tree of Life is not an “introductory work” or a “beginner’s guide,” but a serious and challenging study of a complex subject.

The author, Robert C Stein, is a Professor Emeritus of Biology in the NY State University System, whose involvement in the study and practice of Thelema spans three decades and travels in five continents. In writing this study he has, as far as possible, approached the texts from a scientific and logical viewpoint, and in most instances has included facsimile excerpts of the pertinent material illustrating the basis of his thought.

For further information and a photograph of the edition deluxe please go to: http://weiserantiquarian.com/mysteryoftheletters/

For one week only copies of the “Blue & Gold” issue will be available at the reduced price of $50.00 each (plus shipping) and will come with a bookplate signed by the author tipped onto the front free endpaper. This offer only applies to copies bought and paid for before midnight (US EST), Sunday April 22nd, 2012ev. Signed copies subject to availability.

or email us at: books@weiserantiquarian.com