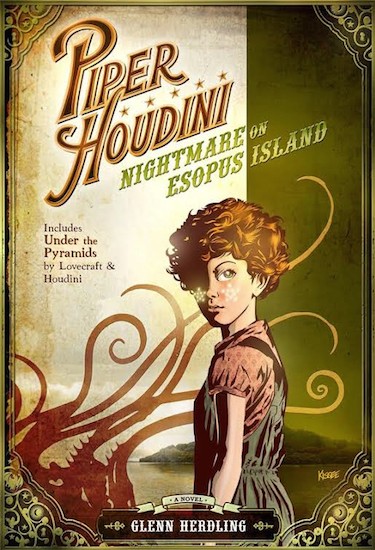 “This island was the perfect setting for the conclusion to my story because it has an eerie history that continues to pique the curiosity of Hudson Valley residents and visitors alike,” Herdling said. “That’s because in the summer of 1918, the renowned British occultist Aleister Crowley canoed out to Esopus Island and spent 40 days and nights there in meditative isolation.”

Crowley and Esopus Island both made their debut in the first novel of the series, “Piper Houdini: Apprentice of Coney Island,” though the name of the island was only alluded to. In the novels, the year is 1926, and Crowley has returned to the tiny island to conclude his sinister ritual. Only Piper and her friends from the Dreamland Freak Show stand between him and the demonic subjugation of the human race. Along the way, Piper encounters a variety of real-life luminaries from the 1920s, including author H.P. Lovecraft and a Rudolph Valentino zombie. “I rode the Wonder Wheel as part of my research for the Piper Houdini novels, but I have never set foot on Esopus Island,” Herdling admits. “It’s something I intend to do before the end of the year.” “Piper Houdini: Nightmare on Esopus Island” is currently available exclusively as an e-book at Amazon.com and will be released in print later this year.