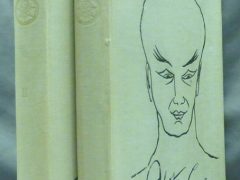 Regular visitors to this site will know just how much I admire Weiser Antiquarian and their always-fascinating book catalogues. This time, though, they have outdone themselves, with two Catalogues announced at the same time. And, believe me, the content is astonishing! Many items have already sold but the catalogues remain – in any case – a fabulous resource for those of us obsessed with the writings of Aleister Crowley.

Our annual “Holiday Bargain List” is now on-line. It comprises an interesting mixture of fresh items and items from stock, mostly on the Occult and Eastern Religions, but also covering… Read more »

December 2017 E.V. Update Greetings Wishing all Midian customers the best for the festive season. This will be the last email before the New Year. Much in store for 2018… Read more » Weiser Antiquarian Books Catalogue No. 167 Mostly Magick: Surplus Books from the Library of Stephen Skinner As the title suggests, the one hundred and sixty-seventh of our on-line catalogues comprises duplicates and… Read more »

Thanks for the feedback regarding the opportunity to view photographs and details of Weiser Antiquarian’s sale of the original holograph manuscript of Crowley’s ‘The Book Of Lies’. That item has… Read more »

The usual excellence from Weiser Antiquarian… Aleister Crowley & Associates Used and Rare Books and Items of Ephemera It is a typically varied catalogue, with ordinary second hand books as… Read more »