LON MILO DUQUETTE IN EUROPE 2014 e.v. We would like to warmly invite you to talks, workshops and live concerts of Lon Milo DuQuette in May and June this year…. Read more »

Lon Milo DuQuette will be forming an extensive, online Enochian working to coincide with the end of the Mayan Calendar and the “End of the World.”

Speech in the Silence is the Official Podcast of Blazing Star Oasis, O.T.O. In this episode: “Introduction to the Rites of Eleusis” excerpt by Lon Milo DuQuette Musical Interlude: “November… Read more » 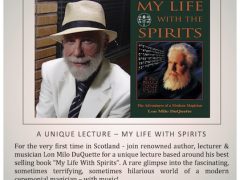 Enochian Magick has long been considered the “deep end of the pool” of the occult arts. Ever since John Dee and Kelley began their workings with these angelic beings centuries… Read more »