In Season 1 [of Pennyworth], Martha found herself in a horrific situation after attending a part thrown by Aleister Crowley, the demon-worshiping, orgy-obsessed villain who kidnapped her. Three days later, she resurfaced, naked in a field, with no memory of what transpired. 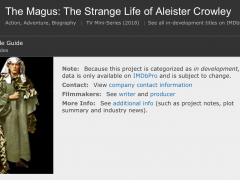