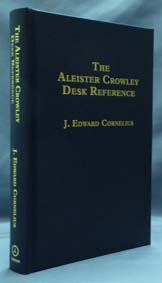 Comprising nearly 400 pages and many thousands of listings, this new edition of The Aleister Crowley Desk Reference is the most comprehensive alphabetical guide to the writings of “the Beast” ever created. While its primary purpose is to allow the reader to trace the various appearances in print of any published work by Aleister Crowley, it is much more than a simple cross-reference, and the listings are enlivened with bibliographical and historical detail that is sure to delight and amuse even the most jaded Crowleyphile. The sometimes baffling system of “Liber” numbers and classifications are clearly laid out in a series of Appendicies. The principal editor of the text, J. Edward Cornelius, is of course well known in Thelemic circles, not least for his editorship of the “Red Flame” series of journals in which “The Aleister Crowley Desk Reference” first appeared. Contributing editor, Andrew Drylie, is also an authority on Crowley’s works and was co-author of the “Crowley Cross-Index” (1976), the first modern work to systematically explore the publishing history of his texts.

The first ever facsimile publication of this manuscript version of Dr. Rudd’s Nine Hierarchies of Angels which was compiled by Frederick Hockley during the 1830s. The manuscript comprises three distinct but connected texts; “Dr Rudd’s Nine Hierarchies of Angels” (a work in part at least derived from a seventeenth century manuscript “Janua Magica Reserata”), the English translations of John Dee’s angelic keys, and the invocations of the angels relating to the ‘table of the earth.’ The book includes a comprehensive Introduction by Alan Thorogood, followed by a typeset transcription of the text of the manuscript, with explanatory footnotes, etc., and a facsimile of the original Hockley manuscript with color preliminary pages. As is now well known, Frederick Hockley (1808-1885) was an occultist and freemason whose interests included scrying, ritual magic, alchemy and spiritualism. In later life Hockley was associated with the Societas Rosicruciana in Anglia and his peers considered him to be one of the great occult scholars of his time. One of the founders of the Golden Dawn, W. Wynn Westcott, held Hockley in such high regard that he posthumously and imaginatively claimed Hockley as one of the Order’s most outstanding Adepts.

For one week only copies of the softcover edition of The Aleister Crowley Desk Reference will be available at the discounted price of $27.00 and Dr. Rudd’s Nine Hierarchies of Angels will be available at the discounted price of $54.00. Each copy will include a signed book-plate as described (subject to availability). During the launch period we will also offer “two-for-one” discounted shipping rates as below for customers who order any two of the above new Teitan Press releases (this can be two copies of the same book, or copies of two different books, etc). In other words customers ordering two books will only pay the standard shipping charges for one copy.

*Offer ends at midnight (EST), Friday November 22, 2013, and is of course subject to availability. Orders processed on a “first come, first served” basis.

Place your order direct via our secure website at:
http://www.weiserantiquarian.com