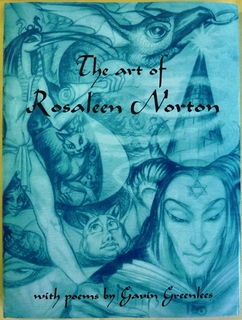 Weiser Antiquarian Books and the Teitan Press are pleased to announce the launch of:

The Art of Rosaleen Norton

with Poems by Gavin Greenlees

with an Introduction by Keith Richmond

The first US edition (and the first-ever complete facsimile edition) of this magnificent book of occult-inspired artist Rosaleen Norton’s drawings, with poems by Norton and her lover Gavin Greenlees.

The artist, Rosaleen Norton, was no stranger to controversy. Born in New Zealand in 1917, she moved to Australia with her family when still a child and began drawing at the age of three, going on to study art at the prestigious East Sydney Technical College after leaving school. She worked briefly for a weekly newspaper, but soon abandoned regular employment and commenced a succession of part-time and temporary jobs which enabled her to devote herself both to her art and to her growing fascination with the occult.

An accomplished artist and natural rebel, her bohemian lifestyle, unconventional beliefs, and her challenging and often sexually-charged artwork attracted the condemnation of moral conservatives. Despite previous exhibitions of her work in Adelaide and Sydney proceeding without problem, police raided an exhibition of Norton’s art in Victoria in 1949 and she was subsequently charged with exhibiting “obscene articles.” Norton won that case, but following its release in 1952 her book The Art of Rosaleen Norton was soon banned from importation into the USA on the grounds of obscenity and also had a restricted circulation in Australia, with a court ruling that some of the plates were “obscene and an offence to chastity and delicacy.” The publisher could only legally sell copies The Art of Rosaleen Norton that had the offending plates “blacked out.” More arrests and charges against Norton followed, culminating in 1960 with the destruction, by judicial order, of several of her paintings. Prior to that no other serious Australian artist had ever been subject to such outrageous bureaucratic vandalism. The popular focus on Norton’s occultism and the sexual nature of some of her paintings meant that her artistic talents were largely ignored. Most knew her only as “the Witch of Kings Cross,” one of Sydney’s more colourful eccentrics. She died in December 1979, leaving the world a rich and unusual artistic legacy that is only now starting to be appreciated.

The Art of Rosaleen Norton was reprinted in Sydney in 1982, but with a number of changes and omissions. This Teitan Press edition is the first US publication of the book, and the first reprint to include a complete facsimile of the original 1952 edition. The facsimile is prefaced by a new 40 page historical Introduction by Keith Richmond who played a key role in organizing the “Occult Visions of Rosaleen Norton” retrospective of Rosaleen Norton’s art that was held in Sydney in 2000, and has also edited a collection of her short stories, Three Macabre Stories (1996 & 2010), and a collection of her magical and autobiographical writings Thorn in the Flesh (2009).

To view other pictures of the book, please visit the Teitan Press website at:

For one week only copies will be available at the above discounted price and each book will come with a bookplate signed by the editor, and be sent at a reduced shipping rate (it is a large book so above-normal shipping costs would usually apply).

(More than 1 copy, price varies according to quantity and destination.)

Place your order direct via the secure website at: