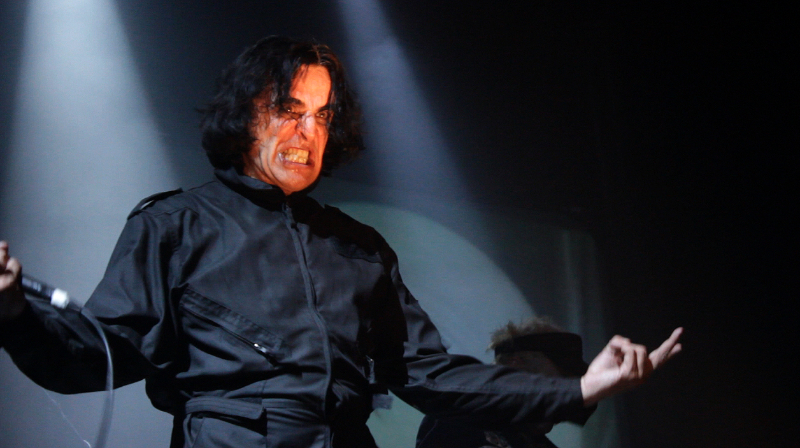 Ten years in the making, and with a running time of nearly two and a half hours, The Death and Resurrection Show is director Shaun Pettigrew’s epic anthem to the career of influential post-punk rock band Killing Joke.

Roughly chronological, the film documents the band’s progress from early punk roots to later rock, commercial and heavy metal. Pettigrew mixes the band’s archival footage with news clips, quotations and interviews. Although the poorer visual quality of the older footage is to be expected, much of it has been altered for the wide screen by incorporating a mirroring effect at both sides. Coupled with dim lighting, a deliberately dark and gritty feel to the visuals, and a repeated close up of vocalist Jaz Coleman’s mouth, there is a surprisingly claustrophobic atmosphere to something designed for big screen release.

The occult philosophies underlying the music of Killing Joke are oddly fascinating, and touched upon repeatedly via performance and personal anecdote: Jaz believes he is the reincarnation of famous English occultist Aleister Crowley; lightning strikes a friend without harm; the band experience time distortions; gigs become ceremonies. However, mingling these tantalising glimpses with run-of-the-mill interview footage dilutes their magic, the mundane settings and disgruntled rumblings of former band members neutralising the narrative potential of the band’s central relationship with the supernatural.

Apart from dipping in and out of the occult, the documentary follows a familiar storyline: band forms, band falls out, band falls apart, band reforms, repeat. Members experience problems with mental health and drugs. Recognising that these are serious issues for the individuals involved does not lessen the feeling of music-documentary déjà vu. As with the supernatural anecdotes, much more could have been made of the huge influence Killing Joke had on heavy metal, industrial dance and 90s grunge, which may have broadened the scope of The Death and Resurrection Show from what is otherwise a fairly standard rockumentary.

The Death and Resurrection Show was released nationwide on 2nd October 2015.

Source: The Death and Resurrection Show | Movie review – The Upcoming

Finally…… Can not wait for this.