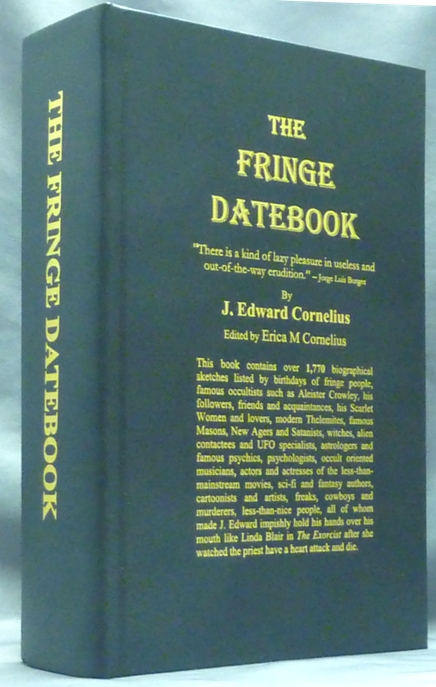 This promises to be an enormously helpful resource for students of the life and works of Aleister Crowley. Available now from Weiser Antiquarian.

From Jerry: “I began writing this book began well over forty years ago. I was looking at my desk calendar, reading the names in the square with a magnifying glass. One was an actor, the other a politician and I had no idea who the third was. I yawned, was not impressed. Part of me wondered who they were, but I was not motivated enough to seek answers. I had other interests. I was always bathed in the fringes of society. I have walked in the shadows of dark alleys most of my life. I have taken great pleasure in subjects that are usually ignored as being the actions or babblings of outlandish and delusional people. But in these people, with their bizarre exploits and strange tales, I found my solace. They constantly caused me to question my reality, to sharpen my wit and realize how little I knew beyond the proverbial white picket fence of my family. My curiosity sparked by the boring calendar, I started jotting down the birth dates of every person that confronted my sanity into a huge, blank book. Many of the birthdates in this book are extremely rare, even by Internet standards, which makes this book very unique. The entries included biographical sketches of everyone from famous occultists like Aleister Crowley, many, many of his followers, his friends and acquaintances, his numerous Scarlet Women, lovers, as well as a multitude of modern Thelemites, OTO historical figures, Scientologists, to famous Masons, New Agers and Satanists, witches, alien contactees and UFO specialists, astrologers and famous psychics, psychologists, occult oriented musicians, poets and writers, actors and actresses of the less-than-mainstream movies, sci-fi and fantasy authors, cartoonists and artists, freaks, cowboys and murderers, less-than-nice people who amused me and virtually anyone who made me impishly hold my hands over my mouth like Linda Blair in The Exorcist after she watched the priest have a heart attack and die. With each name I include a biographical sketch. It’s taken me years, but little by little, with each new entry the book grew and grew until one day I realized I had created a monster while gleefully admitting that it has been nothing less than pure frivolity that drove me to produce it. 1,770 entries.”