The Law Of Thelema As Method: Putting the “DO” in “Do what thou wilt

JAMES A ESHELMAN has been a writer and teacher of occult and metaphysical subjects for over 35 years, including astrology, magick, yoga, Qabalah, tarot, occult psychology, and related Hermetic subjects.

His many writings include The Mystical & Magical System of the A.’.A.’. and 776½: Tables of Correspondences for Practical Ceremonial, plus numerous astrological books and articles. This is his first new astrology book since Interpreting Solar Returns in 1985.

Mr Eshelman is Chancellor of College of Thelema and Prolocutor General of Temple of Thelema. He edited, and was a major contributor to, COT’s biannual journal, Black Pearl for its six year run 1997-2002.

He has served as president of the International Society for Astrological Research (ISAR) , Deputy Grand Master General of Ordo Templi Orientis (O.T.O.) , and Grand Imperator of Fraternitas L.V.X. Occulta (F.L.O.) .

He accepted ordination in the Gnostic Catholic Church in 1979 and celebrated its Mass for 11 years. He was consecrated a bishop in the Vilatte succession in 1985.

He lives in Los Angeles, California.

Please join us for this special event. Books will be available for signing, and a wine and cheese reception following the lecture. 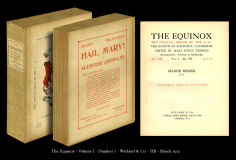