Today’s Daily Mail includes a re-hash of material already published elsewhere – this time under the title Peaches and the religious cult with a very dark past: Geldof uses Twitter account to urge followers to learn about Order of Oriental Templars.

However, this inexcusably lazy piece manages to include more misinformation than any I’ve seen in a long time:

Gone are her wild child days, replaced with a quiet life of motherhood and domesticity.

Or so she says. In reality, it seems Peaches Geldof hasn’t quite said goodbye to her rebellious side just yet.

The 24-year-old has been urging her tens of thousands of Twitter followers to read up on the notorious OTO cult, whose leader was a sex and drugs addict once dubbed ‘the wickedest man in the world’.

She has been recommending controversial books written by infamous occultist Aleister Crowley, which call for followers not to conform to society.

Miss Geldof, whose troubled past once saw her collapse from a suspected drug overdose, has also had a tattoo on her arm bearing the initials OTO – which stand for Ordo Templi Orientis, or Order of Oriental Templars.

Crowley also founded the controversial Thelema religion in the early 20th century. Its key message is: ‘Do what thou wilt shall be the whole of the Law.’

Bob Geldof’s daughter, who is pregnant with her second child, is said to have become interested in Crowley during her short-lived marriage to musician Max Drummey when she was 19.

He had Crowley’s quote ‘Quo stet olympus’, which means ‘Where the gods and angels live’, tattooed below his neck.

Miss Geldof has now been encouraging her 148,302 Twitter followers to pick up Crowley’s contentious literature, which include The Book of Law, after one of her fans asked her: ‘Where can I get more info about Thelema?’

She replied: ‘I would buy Aleister Crowley’s books on it, they’re not expensive and super interesting.’

She then uploaded a picture from one of his publications. In other images posted online, she has shown off a tattoo of the letters OTO inside a heart on her right forearm. She had the design inked in 2011.

Despite Crowley’s death as an impoverished heroin addict at the age of 72 in 1947, he became an icon for anti-establishment figures in the 1960s.

Comedian Russell Brand and musician Jay-Z are said to be modern-day followers of OTO.

Miss Geldof, whose mother Paula Yates died of a heroin overdose in 2000, has never spoken about her interest in the strange cult, but once claimed she had been looking for ‘a spiritual path’ as a teenager.

A source said: ‘Peaches is fascinated by Aleister Crowley and wants to put the word out there.

‘It’s true that she is interested in OTO and she had the tattoo done a couple of years ago.’

Peaches has also dabbled in Scientology and is now said to have converted to Judaism, the religion of her musician husband Thomas Cohen.

Professor Ronald Hutton, a historian at Bristol University, said: ‘OTO is about using magical acts to become a stronger, more effective person. It’s more mental magic than anything to do with cauldrons.’

A HISTORY OF DRUGS, SEX AND MUTILATION

Ordo Templi Orientis – or OTO – was brought to Britain from Europe in the early 20th century by infamous occultist and drug addict Aleister Crowley.

He was said to have mutilated women by carving signs on their breasts with red-hot daggers, and was accused of eating babies in magic rituals.

He was widely criticised for being ‘in revolt against the moral and religious values of his time’. 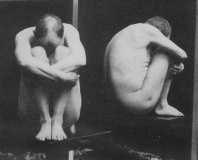