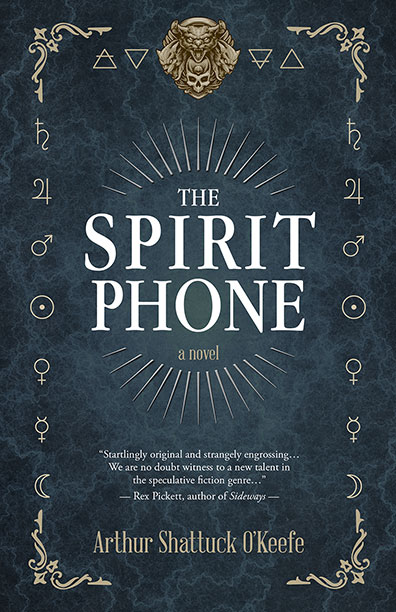 Aleister Crowley and Nikola Tesla confront the enigma of Thomas Edison’s new invention: a phone to communicate with the dead.

It is August 1899 and Aleister Crowley is psychically attacked while mountain climbing in Tibet. Attempting to teleport back to his base camp, he instead finds himself in the Manhattan home of inventor Nikola Tesla. Crowley is convinced he was attacked by a malevolent entity that is attempting to cross over into our world and implores Tesla to help him.

When Thomas Edison unveils his new spirit phone, an invention that he claims will allow people to speak with the dead, Crowley and Tesla are suspicious of the device. Teaming up, the unlikely duo combine their respective skills in magick and technology to investigate the device’s actual origin and ultimate purpose.

As insanity and suicide multiply among spirit phone users, newspaper articles begin hinting about the possibility of the increase being linked to the new gadget, and the race is on to solve the mystery of the strange device.

Crowley and Tesla soon find themselves embroiled in a desperate race to stop the spirit phone’s use by an unknown adversary who is only interested in one thing—inaugurating hell on earth.

This is indeed an interesting coincidence. Over the Newyear’s weekend I was researching the rumor of Edison’s having discussed designing a, EVP machine to record the voices of the dead. I found several interesting articles about Edison by searching the historical newspaper database of the Library of Congress website. Edison theorized that a hyper-sensitive receiver could (He emphasized “could”) pick up disembodied voices. This was in the 1920s and Edison was quite old by that time. The story sounds very entertaining, if not extremely far-fetched (That is why it is science fiction fantasy and alternate history) I doubt if the… Read more »