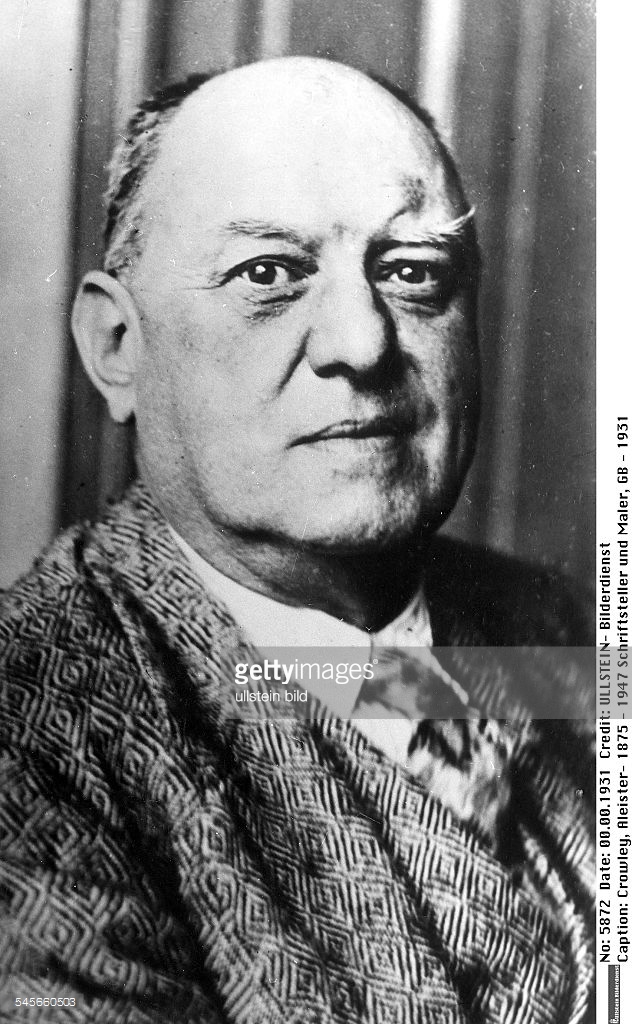 From James Delingpole’s review of the documentary:

Apart from the fact that he wasn’t at the same school as me, my other main Crowley claim to fame is that I once held his wand. It belongs to this splendid fellow with three nipples whom I shan’t name in case his house is invaded by black magicians. He owns it because Crowley used to sponge off one of his relatives. This man also owns a really crappy picture Crowley did of some cowled figures walking up a hill. It’s called ‘Pilgrims on the Road to Nowhere’.

Now the thing that struck me when I held Crowley’s wand was just how unstriking the experience was. It looked mildly sinister — about the size of a small sword stick, made of dark metal, with carvings on it — and I was reluctant to touch it, but when I did, I felt no evil vibes or anything. This, the owner explained, is because wands are very personal things and only have power for the person for whom they were created.

Even so, I was quite disappointed. I do believe in the existence of powers of darkness but the impression I was left with was that Crowley was more of a decadent poseur than the genuine Beast 666. And subsequent reading seem to confirm this. If he was really so powerful, how come he achieved so little? How come he died in squalid penury?

This was the problem facing Masters Of Darkness. How could it reconcile ‘The Wickedest Man in the World’ legend with the sordid reality of a man whose worst crimes were: abandoning his wife and child; encouraging his mistress to copulate with a goat; sodomising his boyfriend while invoking demons in the Tunisian desert; eating poo; not going to help four mountaineering colleagues caught in an avalanche on Anapuma; accidentally accidentally poisoning one of his disciples with cat’s blood? All jolly naughty things, obviously, but hardly the acme of evil in a century which yielded Mao, Stalin, Hitler and Pot Pot. But the programme got round this pretty well, I thought. Rather than twist the facts more than they could bear, it simply got Brian Cox (the original Hannibal Lecter) to do the voiceover, it recruited various spooky looking occultist types with brilliant names like Aron Paramor to act as expert witnesses, and it shot almost everything by lurid torchlight with the same wobbly camera that was used to make The Blair Witch Project. And hey presto, the adventures of an overrated, coprophagic loser were magically transformed into something almost quite scary.

Actually, that’s slightly unfair of me. I did come away believing that although he could be a bit of a dilettante — having bought Boleskine House especially so that he could practise the world’s darkest black mass, he gave up the ceremony after several weeks because he got bored — he probably was genuinely possessed by demons from the othenvorld. His wife witnessed the spirit entering him in a hotel in Egypt; and his last lover — mother of his only surviving child: what has happened to him, I wonder — saw it disappear with a roll of thunder and a swoosh of the curtains (on a very calm day) when he died. But in a way, that only makes his story sadder. Surely, the whole point of selling your soul to the devil is that, during your life, you get to do cool stuff like sleep with Helen of Troy and amass huge wealth? All poor old Aleister got to do was ingest too much cocaine, heroin and poo, then end up lodging in Hastings. Dr Faustus he wasn’t.

4 comments on “The Wickedest Man In The World”