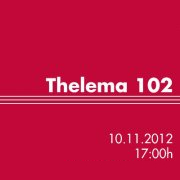 A group of Thelemic Enthusiasts, for the first time in Macedonia, are organizing a Lecture on Qabalah, Ceremonial Magick, Thelema and its sociological & artistic aspects.

This lovely bunch of Thelemites is comprised of Marko M. (Serbia), talking about Hermetic Qabalah and it’s comparison to the Orthodox Kabbalah as well as its practical applications in Western Occultism; Stojan  Nikolić discussing the fundamental principles of Ceremonial Magick; Vera Nikolić giving an introductory speech about Thelema, its development and basic tenets; Bojan Antić will be focusing mainly on the socio-political aspects of Thelema , while Kiril Stoilkov will show how Thelema has informed the various Art-forms and Media with an emphasis on Occulture.

The visual delights of the event are covered by the screening of “Back to Human Nature” a film program celebrating a new old perception of nature – courtesy of Carl Abrahamsson (Sweden).

This is a non-partisan endeavor unaffiliated with any formal or informal occult group or Order. As such, it represents a pioneering attempt to bring closer the idea of Thelema as a system and way of life to the curious minds currently residing in the Heart of the Balkans.