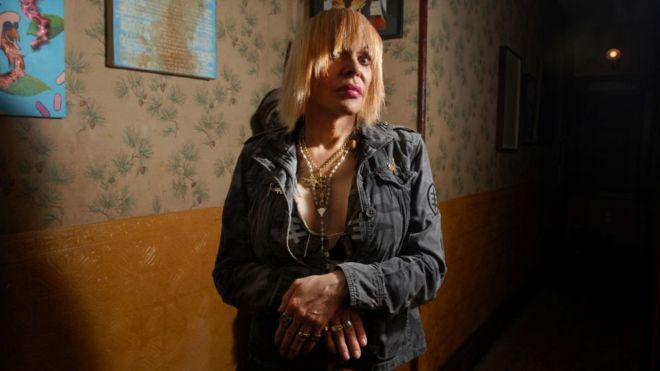 The musician and artist, who had been battling leukaemia for two-and-a-half years, was 70.

With Throbbing Gristle, Genesis helped pioneer the genre of industrial music. In later life, they became a “body evolutionist”, proposing a new gender that was beyond male and female.

The death was confirmed by Genesis’s daughters, Genesse and Caresse. In a statement, they said their father “dropped he/r body early this morning, Saturday March 14th 2020”.

“S/he will be laid to rest with h/er other half, Jaqueline ‘Lady Jaye’ Breyer who left us in 2007, where they will be re-united.”

They concluded the post by thanking people for their “love and support and for respecting our privacy as we are grieving”.

Their 1976 exhibition at London’s Institute of Contemporary Arts, titled Prostitution, scandalised the art world, and prompted Conservative MP Nicholas Fairbairn to denounce the group as “the wreckers of civilization”.

Crude, uncompromising and deliberately malicious, it was not an easy listen – based around multiple versions of the songs Slug Bait and Maggot Death, which detailed sadistic acts of violence and murder. Only 785 copies were pressed, but the album was a key influence on the industrial movement, a more antagonistic cousin of punk.

“In terms of being shocking, punk was pretty tame in comparison,” said Simon Reynolds, the author of Rip It Up and Start Again: Postpunk 1978-1984. “They were writing songs about serial killers and cutting themselves onstage.”

The band upped the dread on their second album, D.O.A, but discovered a more accessible side on 1979’s 20 Jazz Funk Greats, recorded on a tape machine they had borrowed from Paul McCartney.

Two years later, Genesis formed another band, Psychic TV, who explored the singer’s interest in the occult and fetishism; and scored a minor hit with Godstar, a tribute to late Rolling Stone guitarist Brian Jones.

The band’s output was prolific – releasing more than 100 albums, and entering the Guinness Book of World Records after issuing 14 live records in the space of 18 months.

The couple also adopted genderless pronouns – s/he and he/r – explaining that they wanted to create a third gender.

“It’s not male or female, not either/or — just complete,” Genesis told Paper magazine last year. “We thought it was important to remind people of that idea, and as artists, we figured the best way to do so was visually.”

In 1995, Genesis nearly lost their left arm while escaping a fire at the Los Angeles home of the producer Rick Rubin. S/he was awarded $1.5m in damages, and used the money to bankroll experiments in photography, collage, sculpture and cosmetic surgery.

Having been a fringe artist for years, Genesis began to find h/er work embraced by the fine art world, including Tate Britain, which acquired several pieces.

After Lady Jaye died of an acute heart arrhythmia in 2007, Genesis continued their Pandrogeny Project, and recording a final album with Psychic TV, Alienist, in 2016.