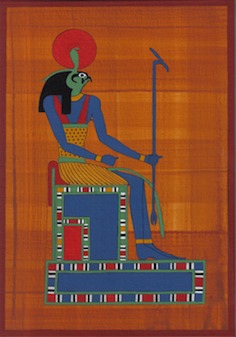 To celebrate the Feast of the Book of the Law, the ‘Magical Mandarin’ is pleased to ‘unveil’ a new project to create a standard series of images of the Egyptian deities encountered in Liber Resh and other Thelemic rituals connected with the Stele of Revealing. A long-term project, ‘Unveiling the Company of Heaven’ aims to become a major contribution to the iconography of Thelema. Your support for this project is essential to its successful completion. Hand-painted copies of all works can be commissioned directly from the artist.

After several years not only of creating replicas but also studying the Stele of Revealing and the original beliefs that surrounded it, ‘Unveiling the Company of Heaven’ arose out of research on Crowley’s use of the Stele’s iconography in rituals such as Liber Resh.

Also it is better if in these adorations thou assume the God-form of Whom thou adorest, as if thou didst unite with Him in the adoration of That which is beyond Him.

Images for the purposes of god-form assumption, visualisation and other ritual uses are not always easily obtainable. ‘Unveiling the Company of Heaven’ aims to produce images of a range of the various forms assumed by the Egyptian Gods to allow the practitioner to work with different aspects of the deities involved.

All of the images will be painted in the simple, ‘vernacular’ style of ancient Egyptian art as found in the Book of the Dead and on funerary artefacts. Where possible, the images will be based on the iconography of the Stele itself, other funerary equipment of Ankh-af-na-khonsu and artefacts dating from the Late Period.

Individual images will be produced in related sets. The ‘Ra’, ‘Tum’, ‘Khephra’ and ‘Athathoor’ of Liber Resh form a basic set of ‘Four Adorations’. Other sets will include Thoth (Tahuti), the Four Sons of Horus and Harpocrates, drawing on iconography found on the inner coffin of Ankh-af-na-khonsu.

All of the images produced as part of the ‘Unveiling’ will be supported by extensive notes.

At present, hand-painted copies, not prints, of the images ‘unveiled’ in the series can be commissioned directly from the artist.

For further images and information, please go the page titled ‘Unveiling’ at themagicalmandarin.com