The second book of the series from 100th Monkey Press is the debut of Victor B Neuburg’s unpublished poem The New Diana. Available in a very limited hand-bound edition of only 75 copies.

Victor B Neuburg’s final draft of The New Diana was completed 28 June 1912. An advertisement announcing the poem as “in preparation” was included in the September 1912 issue of Aleister Crowley’s The Equinox, Volume I, Number 8. Unfortunately, The New Diana, along with numerous other items mentioned in the advertisement, was never published. A typescript of The New Diana exists in Binder 2 of Yorke OS N4 in the Gerald Yorke collection at the Warburg Institute, London, and serves as the basis for this edition.

There is a tradition that when the disciple takes the first step on the path, an obstacle reveals itself as a test. This obstacle typically manifests itself as a sexually desirable partner. It is in The New Diana that Neuburg writes of this ordeal:

“There is one who all but fell into the Abyss, through the Wiles of a Syren; for she by her Seductions closed against him the Way of Initiation … Even to the Brink of Hell was lured that Disciple; the White Breasts and dark Eyes of Lilith stood even between him and the great Gods, wherefore the Gods heavily smote him for his Perfidy to Them and to his Master. And this Syren was a Projection of the Disciple himself upon the Screen of the visible Universe, even as was Lilith a Projection of the great God Adonai.”

Victor Benjamin Neuburg was an English poet and writer who was educated at the City of London School and Trinity College, Cambridge, where he read medieval and modern languages. In 1906, at the age of twenty five, Victor was contacted at Cambridge by Aleister Crowley who had read some of Neuburg’s early pieces in the Agnostic Journal.

On 6 April 1909, Neuburg was initiated by Crowley into the magical Order, the A∴A∴, wherein he took the magical name of “Frater Omnia Vincam.”

In 1909 Crowley and Neuburg traveled to Algiers and into the North African desert. While there, they explored the 30 Enochian Æthyrs originally developed by Dr. John Dee and Edward Kelley in the 16th century. These experiences were later documented in Crowley’s book The Vision and the Voice.

In 1910, back in London, Neuburg, Crowley, a violinist by the name of Leila Waddell and a cast of others came together to perform Crowley’s Rites of Eleusis. Neuburg showed great potential as an interpretive dancer and seven performances were conducted at London’s Caxton Hall.

In 1913 Crowley and Neuburg again joined forces in a magical operation known as “”the Paris Working.” Shortly before Crowley left for America in October 1914, Neuburg formally broke off with Crowley and renounced his A∴A∴ oath. Crowley’s reaction to this was to ritually curse Neuburg which apparently led to Neuburg having a nervous breakdown.

In 1933 Neuburg began editing The Poet’s Corner in the British newspaper the Sunday Referee which encouraged new talent by awarding weekly prizes. He may be best remembered as the “discoverer” of Dylan Thomas when he gave an award to the then-unknown poet who eventually had his first book of poems, titled 18 Poems, sponsored by the publisher of the Sunday Referee.

On 30 May 1940 Victor Benjamin Neuburg died from tuberculosis.

As an added bonus, each copy comes with an additional hand bound pamphlet containing a collection of 6 obscure articles and poems published by Neuburg in various periodicals and books of the day. It includes “The Legend of Aleister Crowley: A Fair Plea for Fair Play” which was written after Neuburg’s break with Crowley. Additionally, each copy includes a handsome themed bookplate and bookmark. 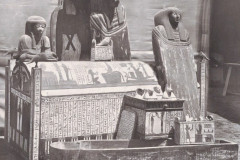