The word Abraxas (or Abrasax or Abracax) was engraved on certain antique stones, called on that account Abraxas stones, which were used as amulets or charms by Gnostic sects. It was believed that Abraxas was the name of a god who incorporated both Good and Evil (God and Demiurge) in one entity, and therefore representing the monotheistic God, singular, but (unlike e. g. the Christian God) not omni-benevolent. Abraxas has been claimed to be both an Egyptian god and a demon. 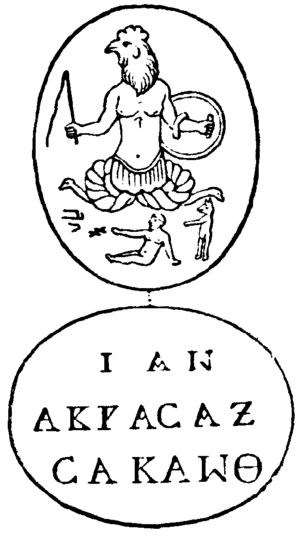 Engraving from an Abrasax stone.

"The bird fights its way out of the egg. The egg is the world. Who would be born first must destroy a world. The bird flies to God. That God's name is Abraxas" - Herman Hesse, Demian

Abraxas was an Archon with a chimera-like appearance (somewhat resembling a basilisk): he had the head of a rooster (or sometimes a king), the body of a man, and legs fashioned like snakes. He is sometimes depicted with a whip in his hand. Abraxas was redeemed and rose above the seven spheres and now reigns beyond the worlds. There are references to Abraxas in several gnostic writings.

It is believed by some that the mystical word Abracadabra is also taken from Abraxas.

The letters of abraxas, in the Greek notation, make up the number 365, and the Basilideans gave the name to the 365 orders of spirits which, as they conceived, emanated in succession from the Supreme Being. These orders were supposed to occupy 365 heavens, each fashioned like, but inferior to that above it; and the lowest of the heavens was thought to be the abode of the spirits who formed Earth and its inhabitants, and to whom was committed the administration of its affairs.

In addition to the word Abraxas and other mystical characters, they have often cabalistic figures engraved on them. The commonest of these have the head of a fowl, and the arms and bust of a man, and terminate in the body and tail of a serpent.