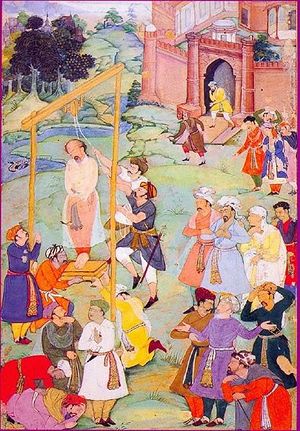 A depiction of the execution of Mansur Al-Hallaj

Among other Sufis, Al-Hallaj was an anomaly, many sufi masters felt that it was inappropriate to share mysticism with the masses, yet Al-Hallaj openly did so in his writings and through his teachings. He would begin to make enemies, and the rulers saw him as a threat. This was exacerbated by times when he would fall into trances which he attributed to being in the presence of God. During one of these trances, he would utter Ana al-Haqq, meaning "I am the Truth" and also, "In my turban is wrapped nothing but God?" which was taken to mean that he was claiming to be God, as Al-Haqq is one of the Ninety Nine Names of Allah.

This utterance would lead him to a long trial, and subsequent imprisonment for eleven years in a Baghdad jail. In the end, he would be tortured and publicly crucified by the Abbasid rulers for what they deemed as a heresy. Many accounts tell of Al-Hallaj's calm demeanor even while he was being tortured, and indicate that he forgave those who had executed him. He died on March 26, 922.

His writings are very important not only to Sufis, but to all Muslims. Many Thelemites also make use of his teachings, especially in terms of his identification as God - a central gnostic principle. His example is seen by some as one that should be emulated, especially his calm demeanor in the face of torture and his forgiving of his tormentors. Many honor him as an adept that came to realize the inherent divine nature of all men and women. Others continue to see him as a heretic.