Difference between revisions of "Artemis"

This article needs rather more information within the context of Thelema or the life and works of Aleister Crowley. You can help by expanding it.

She was the virgin moon goddess of the hunt, wild animals, healing, wilderness, chastity, and paradoxically childbirth (she was worshipped as a fertility/childbirth goddess mostly in cities), since she assisted her mother in the delivery of her twin. Early in her development, she was identified with Hecate, the primal, pre-Olympian feral goddess. She later became more identified with and eventually supplanted Selene as the moon goddess to complement her twin's identification with and supplantation of Helios as the sun god. Artemis also assimilated Caryatis (Carya).

Her priestesses were addressed with the title Melissa. 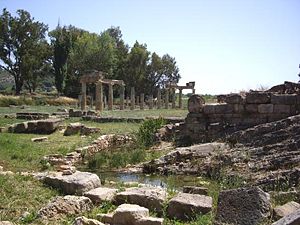 The Sanctuary of Artemis in Vravrona. The water comes from the sacred spring.

Artemis was not worshipped heavily in much of mainland Greece. In Asia Minor, however, she was a principal deity. The city of Ephesus is probably the best known of the Asian centers of her worship, from the story in the Acts of the Apostles, where the Ephesian metalsmiths who feel threatened by Paul's preaching of the new faith, zealously riot in her defense, shouting "Great is Diana of the Ephesians!" (Acts 19:28 KJV) In Rome, she was heavily venerated at Mount Tifata near Capua and in holy forests (such as Aricia, Latium) Her high priest lived in Aricia; his position was passed to the person who was able to kill him with a bough, picked from a tree in the forest.

Festivals in honor of Artemis include Brauronia, held in Brauron and the festival of Artemis Orthia in Sparta.

Young girls were initiated into the cult of Artemis at puberty. However, before marrying (an event in which they had little say, and which occurred shortly after puberty), they were asked to lay all the accoutrements of virginity (toys, dolls, locks of their hair) on an altar to Artemis.

Diana was worshipped in a temple on the Aventine Hill where mainly lower-class citizens and slaves worshipped her. Slaves could ask for and receive asylum in her temples.

She was worshipped at a festival on August 13.

Her name may come from diviana ("the shining one").

As Agrotora, she was especially associated as the patron goddess of hunters. Artemis was often associated with the local Aeginian goddess, Aphaea. As Potnia Theron, she was the patron of wild animals; Homer used this title. As Kourotrophos, she was the nurse of youths. As Locheia, she was the goddess of childbirth and midwives. She was sometimes known as Cynthia, from her birthplace on Mount Cynthus on Delos. She sometimes used the name Phoebe, the feminine form of her brother, Apollo's, Phoebus.

When Hera discovered that Leto was pregnant and that Hera's husband, Zeus, was the father, she banned Leto from giving birth on terra firma, or the mainland, or any island at sea. Leto found the floating island of Delos, which was neither mainland nor a real island and gave birth there. The island was surrounded by swans. As a gesture of gratitude, Delos was secured with four pillars. The island later became sacred to Apollo. Alternatively, Hera kidnapped Ilithyia, the goddess of childbirth, to prevent Leto from going into labor. The other gods forced Hera to let her go. Either way, Artemis was born first and then assisted with the birth of Apollo. Another version states that Artemis was born one day before Apollo, on the island of Ortygia and that she helped Leto cross the sea to Delos the next day to give birth to Apollo.

At three years old, Artemis asked her father, Zeus, while sitting on the god king's knee, to grant her several wishes. She asked for grant her perpetual virginity, lop-eared hounds, does to lead her chariot, and nymphs as her hunting companions. He granted her wishes. All of her companions remained virgins, and she guarded her chastity very closely.

She was once bathing nude in the woods when the Theban prince and hunter Actaeon stumbled across her. He stopped and stared, amazed at her ravishing beauty. When she saw him, Artemis changed him to a stag and, disgusted at his stares, set his own hounds to kill him. He was torn apart. Alternatively, Actaeon boasted that he was a better hunter than she and Artemis turned him into a stag and he was eaten by his hounds.

A Cretan, Siproites, saw Artemis bathing nude and was changed by her into a woman. (The complete story does not survive in any mythographer's works, but is mentioned offhand by Antoninus Liberalis.)

After leaving Eos, Orion became a follower of Artemis. She eventually killed him, though the reasons given vary:

In some versions of the story of Adonis, Artemis or Ares (her lover in this story) sent a wild boar to kill Adonis. This version is suspect because it implies that Artemis had lain with Ares and by virtually all accounts, she remained chaste throughout time.

Artemis killed any of her companions who lost their virginity, such as Maera and Callisto.

One of Artemis' companions, Callisto, lost her virginity to Zeus, who had come disguised as Artemis. Enraged, Artemis changed her into a bear. Callisto's son, Arcas, nearly killed his mother while hunting, but Zeus or Artemis stopped him and placed them both in the sky as Ursa Major and Ursa Minor.

Artemis punished Agamemnon after he killed a sacred deer in a sacred grove and boasted he was a better hunter. On his way to Troy to participate in the Trojan War, Agamemnon's ships were suddenly motionless as Artemis stopped the wind. An oracle named Calchis told Agamemnon that the only way to appease Artemis was to sacrifice Iphigenia, his daughter. According to some versions, he did so, but others claims that he sacrificed a deer in her place and Iphigenia was taken to Crimea to prepare others for sacrifice to Artemis.Subsequent to these events, Iphigenia returns from among the Tauri with the assistance of her brother Orestes. In Euripides' version of the myth, the goddess Athens reveals that Iphigenia will make landfall in Brauron and there be the priestess of Artemis, die, and be buried. 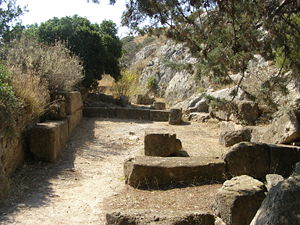 Brauron: The remnants of the shrine once worshiped as "the Tomb of Iphigenia". The cave which used to cover the shrine collapsed long ago.

A Queen of Thebes and wife of Amphion, Niobe boasted of her superiority to Leto because she had fourteen children (Niobids), seven male and seven female, while Leto had only two. Apollo killed her sons as they practiced athletics, with the last begging for his life, and Artemis her daughters. Apollo and Artemis used poisoned arrows to kill them, though according to some versions a number of the Niobids were spared (Chloris, usually). Amphion, at the sight of his dead sons, either killed himself or was killed by Apollo after swearing revenge. A devastated Niobe fled to Mount Siplyon in Asia Minor and turned into stone as she wept, or committed suicide. Her tears formed the river Achelous. Zeus had turned all the people of Thebes to stone and so no one buried the Niobids until the ninth day after their death, when the gods themselves entombed them.

Zeus pursued Taygete, one of the Pleiades, who prayed to Artemis. The goddess turned Taygete into a doe but Zeus raped her when she was unconscious. She thus conceived Lacedaemon, the mythical founder of Sparta.

Otus and Ephialtes were a pair of brothers and giants. At one point, they wanted to storm Mt. Olympus. They managed to kidnap Ares and hold him in a jar for thirteen months. He was only released when Artemis offered to sleep with Otus. This made Ephialtes envious and the pair fought. Artemis changed herself into a doe and jumped between them. The Aloadae, not wanting her to get away, threw their spears and killed each other.

After the death of Meleager, Artemis turned her grieving sisters, the Meleagrids into guineafowl.

Artemis killed Chione for her pride and vanity.

Artemis saved the infant Atalanta from dying of exposure after her father abandoned her. She sent a female bear to suckle the baby, who was then raised by hunters.

Among other adventures, Atalanta participated in the hunt for the Calydonian Boar, which Artemis had sent to destroy Calydon because King Oeneus had forgotten her at the harvest sacrifices.