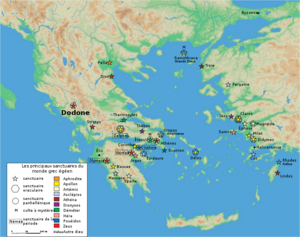 Localization of the sanctuary of Dodona.

Dodona (from Doric Greek Δωδώνα, Ionic Greek: Δωδώνη [1] Dōdònē) in Epirus in northwestern Greece, was an oracle devoted in prehistoric times to a Mother Goddess known as Dione (also identified at other sites with Rhea or Gaia), and later, in historical times, devoted to the Greek god Zeus. Zeus displaced the Mother goddess in the Bronze Age and assimilated her as Aphrodite [2]. The shrine of Dodona was regarded as the oldest Hellenic oracle, possibly dating to the second millennium BCE according to Herodotus. Situated in a remote region away from the main Greek poleis, it was considered second only to the oracle of Delphi in prestige. Priestesses and priests in the sacred grove interpreted the rustling of the oak (or beech) leaves to determine the correct actions to be taken. Aristotle considered the region around Dodona to have been part of Hellas and the region where the Hellenes originated [3] The oracle was first under the control of the Thesprotians before it passed into the hands of the Molossians. [4] It remained an important religious sanctuary until the rise of Christianity during the late Roman era.

Though the earliest inscriptions at the site date to ca. 550–500 BCE, [5] archaeological excavations over more than a century have recovered artifacts as early as the Mycenaean [6] era, many now at the National Archaeological Museum of Athens, and some in the archaeological museum at nearby Ioannina. Archaeologists have also found Illyrian dedications and objects that were received by the oracle during the seventh century BCE. [7][8] Until 650 BCE, Dodona was a religious and oracular centre mainly for northern tribes: only after 650 BCE did it become important for the southern tribes.[9]

At Dodona, Zeus was worshipped as "Zeus Naios" or "Naos" (god of the spring cf. Naiads)—[10] there was a spring below the oak in the temenos or sanctuary— and "Zeus Bouleus" (Counsellor). [11] Originally an oracle of the Mother Goddess, the oracle was shared by Dione (whose name, like "Zeus," simply means "deity") and Zeus. Many dedicatory inscriptions recovered from the site mention both "Dione" and "Zeus Naios". Elsewhere in Classical Greece, Dione was relegated to a minor role by Classical times, being made into an aspect of Zeus's more usual consort, Hera, but never at Dodona. [12]

The god could also be invoked from a distance. In Homer's Iliad 16.233-5 (circa 750 BCE), Achilles prays to "High Zeus, Lord of Dodona, Pelasgian, living afar off, brooding over wintry Dodona" [13] No buildings are mentioned, and the priests (called Selloi) slept on the ground with unwashed feet. The oracle also features in Odysseus' fictive yarn about himself told to the swineherd Eumaeus (Odyssey 14.327-8): Odysseus, he tells Eumaeus, has been seen among the Thesprotians, having gone to inquire of the oracle at Dodona whether he should return to Ithaca openly or in secret (as the disguised Odysseus is actually doing); later (Odyssey 19. he repeats the same tale to Penelope, who may not yet have seen through his disguise. His words "bespeak a familiarity with Dodona, a realization of its importance,and an understanding that it was normal to consult Zeus there on a problem of personal conduct." [14]

Not until the fourth century BCE, was a small stone temple to Zeus added to the site. By the time Euripides mentioned Dodona (fragmentary play Melanippe), and Herodotus wrote about the oracle, priestesses had been restored. Though it never eclipsed the Oracle of Apollo at Delphi, Dodona gained a reputation far beyond Greece. In Apollonius of Rhodes' Argonautica, a retelling of an older story of Jason and the Argonauts, Jason's ship, the "Argo", had the gift of prophecy, because it contained an oak timber spirited from Dodona.

In the third century BCE]], King Pyrrhus grandly rebuilt the Temple of Zeus, and added many other buildings and a festival featuring athletic games, musical contests, and drama enacted in a theatre. A wall was built around the oracle itself and the holy tree, as well as temples to Heracles and Dione.

In 219 BCE, the Aetolians invaded and burned the temple to the ground. Though King Philip V of Macedon rebuilt all the buildings bigger and better than before, and added a stadium for annual games, the oracle at Dodona never fully recovered. In 167 BCE, Dodona was once again destroyed and later rebuilt 31 BCE by Emperor Augustus. By the time the traveller Pausanias visited Dodona in the second century AD, the sacred grove had been reduced to a single oak. [15] Pilgrims still consulted the oracle until CE 391, when Christians cut down the holy tree. Though the surviving town was insignificant, the long-hallowed pagan site must have retained significance, for a Christian Bishop of Dodona attended the First Council of Ephesus in CE 431. 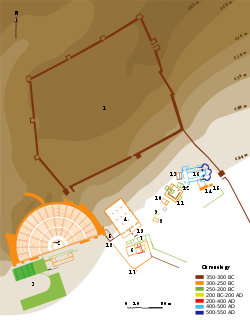 Herodotus [16] (Histories 2:54–57) was told by priests at Egyptian Thebes in the 5th century BCE "that two priestesses had been carried away from Thebes by Phoenicians; one, they said they had heard was taken away and sold in Libya, the other in Hellas; these women, they said, were the first founders of places of divination in the aforesaid countries." The simplest analysis: Egypt, for Greeks and for Egyptians themselves was a spring of human culture of all but immeasurable antiquity. This mythic element says that the oracles at the oasis of Siwa in Libya and of Dodona in Epirus were equally old, but similarly transmitted by Phoenician culture, and that the seers - Herodotus does not say "sibyls" - were women.

Herodotus follows with what he was told by the prophetesses, called peleiades ("doves") at Dodona: “…that two black doves had come flying from Thebes in Egypt, one to Libya and one to Dodona; the latter settled on an oak tree, and there uttered human speech, declaring that a place of divination from Zeus must be made there; the people of Dodona understood that the message was divine, and therefore established the oracular shrine. The dove which came to Libya told the Libyans (they say) to make an oracle of Ammon; this also is sacred to Zeus. Such was the story told by the Dodonaean priestesses, the eldest of whom was Promeneia and the next Timarete and the youngest Nicandra; and the rest of the servants of the temple at Dodona similarly held it true.”

In the simplest analysis, this was a confirmation of the oracle tradition in Egypt. The element of the dove may be an attempt to account for a folk etymology applied to the archaic name of the sacred women that no longer made sense. Was the pel- element in their name actually connected with "black" or "muddy" root elements in names like "Peleus" or "Pelops"? Is that why the doves were black? Herodotus adds:

“…But my own belief about it is this. If the Phoenicians did in fact carry away the sacred women and sell one in Libya and one in Hellas, then, in my opinion, the place where this woman was sold in what is now Hellas, but was formerly called Pelasgia, was Thesprotia; and then, being a slave there, she established a shrine of Zeus under an oak that was growing there; for it was reasonable that, as she had been a handmaid of the temple of Zeus at Thebes, she would remember that temple in the land to which she had come. After this, as soon as she understood the Greek language, she taught divination; and she said that her sister had been sold in Libya by the same Phoenicians who sold her.

I expect that these women were called 'doves' by the people of Dodona because they spoke a strange language, and the people thought it like the cries of birds; then the woman spoke what they could understand, and that is why they say that the dove uttered human speech; as long as she spoke in a foreign tongue, they thought her voice was like the voice of a bird. For how could a dove utter the speech of men? The tale that the dove was black signifies that the woman was Egyptian.”

Thesprotia, on the coast west of Dodona, would have been available to the sea-going Phoenicians, whom Herodotus' readers would not have expected to have penetrated as far inland as Dodona.

2. Hammond, N.G.L. A History of Greece to 322 B.C. Clarendon Press, 1986, p. 39. "...Greek gods too, especially Zeus the sky-god, were at home on Mt. Olympus and in Pieria, and the Zeus of Dodona derived his importance from the Bronze Age when he displaced a Mother Goddess and assimilated her as Aphrodite."

3. Hammond, N.G.L. A History of Greece to 322 B.C. Clarendon Press, 1986, p. 77. "The original home of the Hellenes was 'Hellas', the area round Dodona in Epirus, according to Aristotle. In the Iliad it was the home of Achilles' Hellenes."; Aristotle. Meteorologica. Book 1, Part 14. "Rather we must take the cause of all these changes to be that, just as winter occurs in the seasons of the year, so in determined periods there comes a great winter of a great year and with it excess of rain. But this excess does not always occur in the same place. The deluge in the time of Deucalion, for instance, took place chiefly in the Greek world and in it especially about ancient Hellas, the country about Dodona and the Achelous, a river which has often changed its course. Here the Selli dwelt and those who were formerly called Graeci and now Hellenes."

4. Potter, John. Archaeologia Graeca or the Antiquities of Greece. Blackie, 1840 (Original from the University of Lausanne), p. 258. "Dodona is by some thought to have been a city of Thessaly; by others it was placed in Epirus; and others, to reconcile these two opinions, will have two Dodonas, one in Thessaly, and another in Epirus. They that place it in Epirus (and that is generally believed to have been the seat of the oracle, whether there was another Dodona in Thessaly or not), are no less divided in their opinions about it; for some of them will have it in Thesprotia, others in Chaonia, or Molossia; but Eustathius [disambiguation needed] has undertaken to decide the controversy, telling us that it did indeed once belong to the Thesprotians, but afterwards fell into the hands of the Molossians; and he is herein confirmed by Strabo."

6. Tandy, David W. Prehistory and History: Ethnicity, Class and Political Economy. Black Rose Books Ltd., 2001, p. 23. "It was apparently in LHIIIA2 (the second half of the fourteenth century) that Mycenaean objects began to appear at inland settlements such as Dodona, and to the end of LH IIIA or the first years of LH IIIB we may assign the earliest use, at Mazaraki in the interior of northern Epirus, of Aegean pottery and bronze objects as burial goods in cist graves."

7. Boardman, John (1982). The prehistory of the Balkans and the Middle East and the Aegean world, tenth to eighth centuries B.C.. Cambridge University Press. p. 653.

10. Kristensen, William Brede. The Meaning of Religion: Lectures in the Phenomenology of Religion. M. Nijhoff, 1960 (original from the University of California), p. 104. "The Zeus of the oracle at Dodona, who "dwells in the root of the oak tree "...of the leaves — is called Zeus Naios, "from the spring" (cf . the Naiads)..."; Tarn, William Woodthorpe. "Antigonos Gonatas". Argonaut, 1969, p. 60. "I am supposing that Naios means 'god of the spring', as generally thought, and that the cult of Zeus Naios at Athens and Delos was probably an importation from Dodona."

12. Vandenberg, Philipp. Mysteries of the Oracles: The Last Secrets of Antiquity. Tauris Parke Paperbacks, 2007, p. 29. "In classical times in Epirus Zeus had a consort Dione, but everything suggests that she had never existed independently of him."

16. Vandenberg, Philipp. Mysteries of the Oracles: The Last Secrets of Antiquity. Tauris Parke Paperbacks, 2007, pp. 29–30. "'The Pelasgians', writes Herodotus, 'sent to the oracle at Dodona (the most ancient and, at that period, the only oracle in Greece) to ask advice about the propriety of adopting names that had come into the country from abroad.'"