Notice: Trying to access array offset on value of type null in /home/lashtal/web/public_lashtal/w/includes/profiler/SectionProfiler.php on line 101
 Difference between revisions of "Kanchenjunga" - Encyclopedia Thelemica

Difference between revisions of "Kanchenjunga" 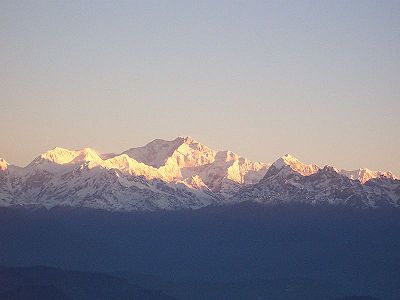 This photo was taken from Tiger Hills, Darjeeling in October 2003. This is the Kanchenjungamountain in the Himalayas, which is the third highest in the world in Nepal.

Kangchenjunga (Nepali: कञ्चनजङ्घा Kanchanjaŋghā), (Limbu Language: Sewalungma (सेवालुन्ग्मा) ), is the third highest mountain in the world (after Mount Everest and K2), with an elevation of 8,586 metres (28,169 ft). Kangchenjunga translated means "The Five Treasures of Snows", as it contains five peaks, four of them over 8,450 metres. The treasures represent the five repositories of God, which are gold, silver, gems, grain, and holy books. Kangchenjunga is called Sewalungma in the local Limbu language, translates as 'Mountain that we offer Greetings to'. Kanchenjunga or Sewalungma is considered sacred in the Kirant religion.

Three of the five peaks (main, central, and south) are on the border of North Sikkim district of Sikkim, India and Taplejung District of Nepal, while the other two are completely in Taplejung District. Nepal is home to the Kanchenjunga Conservation Area Project run by the World Wildlife Fund in association with Government of Nepal. The sanctuary is home to the Red Panda and other montane animals, birds and plants. India's side of Kangchenjunga also has a protected park area called the Khangchendzonga National Park.

Although Kangchenjunga is the official spelling adopted by Douglas Freshfield, A.M. Kellas, and the Royal Geographical Society that gives the best indication of the Tibetan pronunciation, there are a number of alternative spellings which include Kangchen Dzö-nga, Khangchendzonga, Kanchenjanga, Kachendzonga, Kanchenjunga or Kangchanfanga. The final word on the use of the name Kangchenjunga came from His Highness Sir Tashi Namgyal, the Maharaja or chogyal of Sikkim, who stated that "although junga had no meaning in Tibetan, it really ought to have been Zod-nga (treasure, five) Kang-chen (snow, big) to convey the meaning correctly". Following consultations with a Lieutenant-Colonel J.L.R. Weir (HMG political agent to Sikkim), he agreed that it was best to leave it as Kangchenjunga, and thus the name remained so by acceptance and usage.

Until 1852, Kangchenjunga was assumed to be the highest mountain in the world, but calculations made by the British Great Trigonometric Survey in 1849 came to the conclusion that Mount Everest (known as Peak XV at the time) was the highest and Kangchenjunga the third-highest. Kangchenjunga was first climbed on May 25, 1955 by Joe Brown and George Band of a British expedition. The British expedition honoured the beliefs of the Sikkimese, who hold the summit sacred, by stopping a few feet short of the actual summit. Most successful summit parties since then have followed this tradition.

The Kangchenjunga range seen from the east, the Tanggu valley in North Sikkim. The entire chain from Pandim, Siniolchu, Simvu, Talung, Kabru North, Kangchenjunga South Summit, Yalung Kang, Kangchbachen, The Twins, Nepal Peak, Langpo to Jonsong Peak rises at the horizon that forms the border of Nepal.(Photo by Carsten.nebel) 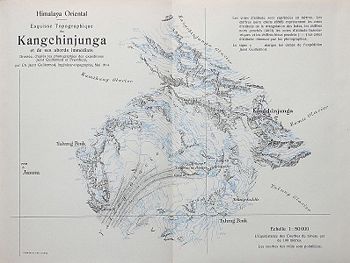 The five peaks of Kangchenjunga are as follows:

The huge massif of Kangchenjunga is buttressed by great ridges running roughly due east to west and north to south, forming a giant 'X'. These ridges contain a host of peaks between 6,000 and 8,000 metres. On the east ridge in Sikkim, is Siniolchu (6,888 m/22,600 ft). The west ridge culminates in the magnificent Jannu (7,710 m/25,294 ft) with its imposing north face. To the south, clearly visible from Darjeeling, are Kabru North (7,338 m/24,075 ft), Kabru South (7,316 m/24,002 ft) and Rathong peaks (6,678 m/21,910 ft). The north ridge, after passing through the minor subpeak Kangchenjunga North (7741 m/25,397 ft), contains The Twins and Tent Peak, and runs up to the Tibetan border by the Jongsong La, a 6,120 m (20,080 ft) pass. Kangchenjunga is known for its famous views from the hill station of Darjeeling. On a clear day, it presents an image not as much of a mountain but of a white wall hanging from the sky. The people of Sikkim revere Kangchenjunga as a sacred mountain. Permission to climb the mountain from the Indian side is rare, but sometimes allowed.

Because of its remote location in Nepal and difficult access from India, the Kangchenjunga region is not much explored by trekkers. It has, therefore, retained much of its pristine beauty. In Sikkim too, trekking into the Kangchenjunga region has just been permitted. The Goecha La trek is gaining popularity amongst tourists. It goes to the Goecha La Pass, located right in front of the huge southeast face of Kangchenjunga. Another trek to Green Lake Basin has recently been opened for trekking. This goes to the Northeast side of Kangchenjunga along the famous Zemu Glacier.

The Kangchenjunga Conservation Area (KCA) covers 2,035 km surrounding the mountain on the Nepalese side. 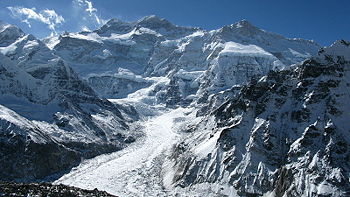 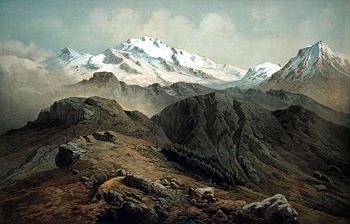 The ascent proved that Aleister Crowley's 1905 route (also investigated by the 1954 reconnaissance) was viable. The route starts on the Yalung Glacier to the southwest of the peak, and climbs the Yalung Face, which is 3,000 metres (10,000 ft) high. The main feature of this face is the "Great Shelf", a large sloping plateau at around 7,500 metres (24,600 ft), covered by a hanging glacier. The route is almost entirely on snow, glacier, and one icefall; the summit ridge itself can involve a small amount of travel on rock. The first ascent expedition made six camps above their base camp, two below the Shelf, two on it, and two above it. They started on April 18, and everyone was back to base camp by May 28.

In 'Mossdale and other caving and climbing miscelania' by Robert D. Leakey, due for publication in December 2009, there is an account and photographs of an unofficial expedition to the summit by a group of soldiers during World War 2. 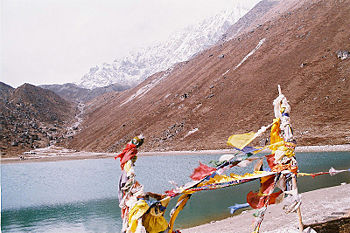 Samiti lake near the Kanchenjunga base camp, Sikkim (Photo taken by Amar Chandra, in 2005).

Some titles are no longer in print but are easily locatable on the Internet.

The above Himalayan Journal References were all also reproduced in the "50th Anniversary of the First Ascent of Kangchenjunga" The himalayan Club, Kollkata Section 2005. 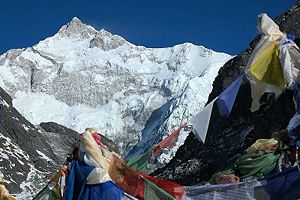 View of Kangchenjunga south-east from Goecha La pass. (Photo taken by Carsten.nebel, in 2005) 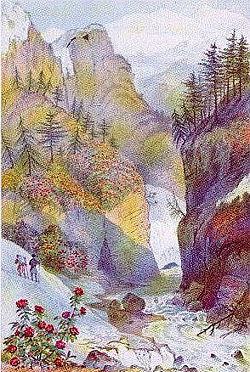 Kinchinjinga from the Thlonok River, with Rhododendrons in flower - 1854. (From Himalayan Journals: or, Notes of a Naturalist in Bengal, the Sikkim and Nepal Himalayas, the Khasia Mountains, Etc. - Joseph Dalton Hooker)