From Encyclopedia Thelemica
Revision as of 23:42, 12 November 2010 by Hecate (talk | contribs) (New page: frame|Cover of ''Magick Without Tears'' by [[Aleister Crowley]] '''''Magick Without Tears''''', a series of letters, was the last book written by English occultist...)
(diff) ← Older revision | Latest revision (diff) | Newer revision → (diff)
Jump to navigationJump to search 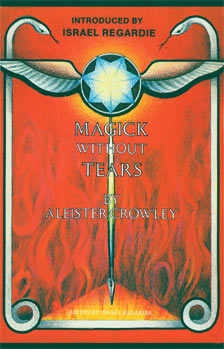 Cover of Magick Without Tears by Aleister Crowley

Magick Without Tears, a series of letters, was the last book written by English occultist Aleister Crowley (1875–1947), although it was not published until after his death. It was written in the mid-1940s and published in 1954 with a foreword by its editor, Karl Germer.

The book consists of 80 letters to various students of magick. Originally to be titled Aleister Explains Everything, the letters offer his insights into both magick and Thelema—-Crowley's religious and ethical system—-with a clarity and wit often absent in his earlier writings. The individual topics are widely varied, addressing the orders O.T.O. and A.'.A.'., Qabalah, Thelemic morality, Yoga, astrology, various magical techniques, religion, death, spiritual visions, the Holy Guardian Angel, and other issues such as marriage, property, certainty, and meanness. The book is considered by many as evidence that Crowley remained lucid and mentally capable at the end of his life, despite his addiction to heroin (prescribed for his chronic emphysema).